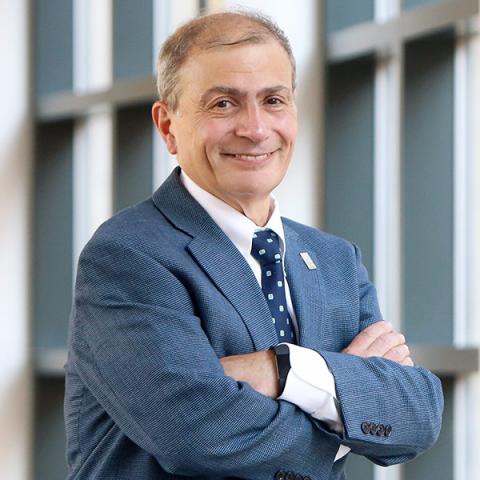 Congratulations to Dr. Robert Bonomo, one of the world’s most renowned researchers in the fight against antibiotic resistant bacteria, who will receive the Mark Wolcott Award for Excellence in Clinical Leadership from the U.S. Department of Veterans Affairs at a ceremony in February, 2020.

For more than 30 years, Bonomo has been advancing the future of medicine in Northeast Ohio at both the Department of Veterans Affairs and at CWRU’s School of Medicine. His research and teaching career have been dedicated to addressing the mounting problem of antibiotic resistance which threatens to undo many of the powerful health gains achieved by the use of antibiotics.

Recognized by the World Health Organization as a chief challenge to global health, antibiotic resistance arises from overuse and misuse of antibiotics in humans and livestock. According to the United States Centers for Disease Control and Prevention (CDC), a minimum of two million people nationwide become infected with antibiotic-resistant bacteria every year and more than 23,000 die. In addition to the biomedical havoc that it wreaks, antibiotic resistance adds as much as $20 billion per year in direct health care costs nationally, according to the CDC.

Bonomo’s work to uncover the genetic and amino acid determinants of bacterial enzymes that create multi-resistance to such widely used antibiotics as penicillins and cephalosporins is paying off. Because of his collaboration with colleagues at CWRU and elsewhere, five new antimicrobials have been approved to date.

Over the course of his career, Bonomo has received more than 70 honors and awards for his research, teaching and clinical care, has more than 65 grants to his name, and has written more than 700 abstracts and 530 peer-reviewed publications.  He has educated and advised more than 80 physicians and researchers who have gone on to make contributions to improve the lives of Veterans and non-veteran patients here in Cleveland and across the country.

In August, 2019, Bonomo was named a Distinguished University Professor, an honorific title that acknowledges the contributions of full-time, tenured faculty with exceptional records of research, scholarship, teaching and service. In 2017, he received VA’s William S. Middleton Award for his contributions to research in the fields of microbiology, epidemiology, diagnosis, prevention, and treatment of Infectious Diseases.  In 2016 he became the first non-European to receive the European Society of Clinical Microbiology and Infectious Disease’s Excellence Award for outstanding lifetime contributions to science, education or professional affairs in the field of clinical microbiology and/or infectious disease.  He also received a lifetime achievement award from the VA Society of Practitioners of Infectious Diseases (VASPID).

“This is a truly unique honor,” Bonomo said after learning he would receive the Wolcott Award. “I must thank the leadership at our VA and University for nominating me and for supporting my career in Cleveland. I never wanted to work anywhere else. I love the CWRU community and teaching and mentoring are as meaningful to me as my research.”

The Wolcott Award for Excellence is presented to a health care practitioner in a leadership or management position who has demonstrated excellence through exceptional support for direct patient care providers, including support of innovations enhancing the quality of direct patient care delivery.