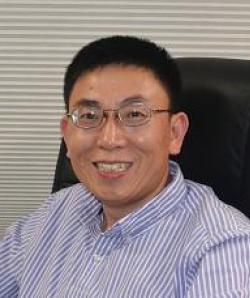 Dr. Wen-Quan Zou received his medical degree from Jiangxi Medical College, his M.Sc. from Tongji Medical University, and his Ph.D. from Shanghai Medical University. He has practiced Internal Medicine and Nephrology for years in Nanchang and Shanghai, China, as both a physician and an attending physician, respectively. His post-doctoral work in neurodegenerative diseases, with a concentration in prion diseases, was done in the Department of Pathology at the Case Western Reserve University and at the Centre for Research in Neurodegenerative Diseases at University of Toronto. Currently, Dr. Zou is a Professor of Pathology with tenure and Associate Director of the National Prion Disease Pathology Surveillance Center at the Case Western Reserve University School of Medicine.

Dr. Zou’s research focus is in the areas of protein aggregation in the conformational diseases especially on the physiological and pathologic prion proteins (PrPC and PrPSc) in prion diseases (PrD) as well as on neurotoxic amyloid β (Aβ) and tau in Alzheimer disease (AD) and α-synuclein in Parkinson’s disease (PD). The co-existence of PrPC and PrPSc in the central nervous system is a prerequisite for PrD, a group of fatal transmissible neurodegenerative diseases such as Creutzfeldt-Jakob disease (CJD) in humans, scrapie in sheep and goat, bovine spongiform encephalopathy in cattle, and chronic wasting disease in deer and elk. His laboratory is the first to demonstrate that small amounts of insoluble aggregates and protease-resistant conformers of PrP called insoluble PrPC (iPrPC) are present in normal human brains (Yuan et al., 2006). The discovery of this new isoform of PrPC may conceivably open a new frontier for investigating the pathogenesis of PrD. For instance, his laboratory also observed that a new protease-resistant PrPSc species with an immunoreactivity behavior and fragmentation similar to iPrPC is present in an atypical sporadic human prion disease termed variably protease-sensitive prionopathy and a familial prion disease (Gambetti et al., 2008; Zou et al., 2010; Zou et al., 2011; Xiao et al., 2013; Zou et al., 2013) and a relative early-stage of a subset sporadic prion disease (Yuan et al., 2008). Remarkably, the Zou laboratory revealed for the first time that iPrPC is the major PrP species that interacts with Aβ in AD and that human PrP exhibits two types of Aβ-binding sites on in terms of its specificity for Aβ42 (Zou et al., 2011). Recently, the Zou lab has demonstrated that the infectious prions are present in the skin of CJD patients (Orru et al., 2017) and they are detectable much earlier than brain damage and clinical signs in prion-infected rodents (Wang et al., 2019), which provides the first proof-of-concept evidence that skin prions can be a biomarker for preclinical diagnosis of prion diseases. Currently, the Zou lab is extending these findings to other common neurodegenerative diseases including PD (Wang et al., 2020) and AD with ultrasensitive real-time quaking-induced conversion (RT-QuIC) and protein misfolding cyclic amplification (PMCA) assays, which may develop highly sensitive and specific skin-based diagnostic tools for less-invasive and early diagnosis for these neurodegenerative diseases.