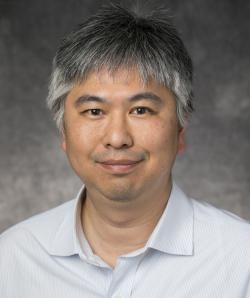 To visualize the process of protein transport and membrane renewal, the group developed the photoconversion technique which enables visualization of protein transport. This photoconversion technique allows enhancing the contrast for newly synthesized proteins by a factor of 1000 – 4000 fold. The technique was combined with high-resolution confocal microscopy to study the ciliary transport of rod photoreceptor membrane proteins. Disruption of ciliary transport mechanism is the major cause of inherited photoreceptor degeneration.

With photoconversion and other techniques, the group found that rhodopsin and peripherin/rds, two major OS constituents, are transported by distinct mechanisms (Tian et al. 2014). Rhodopsin is trafficked through a conventional secretory pathway, whereas peripherin/rds is trafficked through an unconventional secretory pathway. We also found that different combinations of trafficking signals allow these proteins to select specific and distinct routes of trafficking (Lodowski et al. 2013 and Tian et al. 2014). When trafficking signals become mis-coordinated, rhodopsin mislocalizes to the plasma membrane of the rod inner segment. This mislocalization is of clinical importance, as it is observed in the retina of most patients with retinitis pigmentosa. Imanishi Lab is specialized to characterize the mechanisms of membrane protein transport and renewal in photoreceptor cells.