All students, faculty, and staff are invited to attend! The ePortfolio system (eCurriculum) is now open for submission of Lepow Day Abstracts. The DEADLINE for abstract submission is August 24, 2018, at 5 pm, after which the site will close and you will not be able to submit, (No Exceptions!). 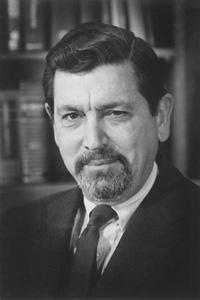 Irwin Lepow received his Ph.D. from Western Reserve University in 1951 for research done in Louis Pillemer's laboratory in the Institute of Pathology. He later received his M.D. from Western Reserve in 1958. Between 1951 and 1967 he served on the School of Medicine's faculty, and during that time he extended the medical school's reputation for complement research that was established by his predecessors Enrique Ecker and Pillemer. In 1967 he accepted the Chair of Pathology at the then new medical school of the University of Connecticut, and subsequently became Chair of Medicine there. In both capacities, he played a key role in the development of that institution. Before his death in 1984, he was Vice President for Research at the Sterling Drug Company, Rensselaer, New York, and President of its Sterling-Winthrop Research Institute.

Dr. Lepow's major research contributions included the purification and characterization of the C1qrs complex of complement and the demonstration of its enzymatic nature. He also discovered, purified and characterized the natural serum inhibitor of C1 esterase, whose deficiency underlies the disease, hereditary angioedema. Another major research contribution was showing that complement components play a significant role as mediators of the inflammatory reaction through their ability to enhance vascular permeability. Dr. Lepow was a prominent figure in the field of immunology throughout his career, based not only on his fundamental contributions to complement research but also on his personal character and leadership abilities. His stature is exemplified by his election as President of the American Association of Immunologists in 1979.

Irwin Lepow had an acute sense of what in life and science is truly significant, and he exhibited an extraordinary and passionate commitment to whatever he did. In turn, he inspired deep respect, devotion and affection among his students, co-workers, and professional colleagues, in his own institution and nationally, for his high ideals, ethical standards, and sense of fair play. He was committed to the education of medical students and believed strongly in the importance of inspiring an appreciation of the research process and developing a cadre of physician-scientists. He had a special place in his heart for this medical school, which makes it especially appropriate that Student Research Day is named in his memory.

The School of Medicine is grateful to the family, friends, and colleagues of Irwin Lepow, who by contributing so generously to the Lepow Endowment Fund has made this Medical Student Research Day and its distinguished Lepow Lecture possible. Particular thanks go to his wife, Martha L. Lepow, also a Western Reserve medical school graduate, for her generosity and continued interest in and support of these endeavors.

Past Chair of Pathology