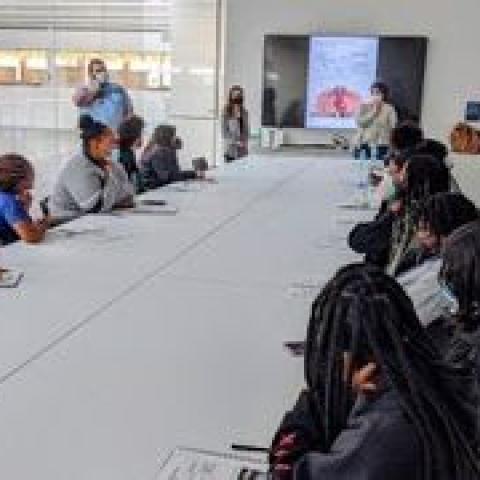 The HEC is hosting a group of inquisitive 11th-grade students from the Cleveland School of Science and Medicine, a high school in the Cleveland Metropolitan School District, that are participating in the Cardiovascular Inquiry Seminar Series (CISS) from February 14-March 16, 2022. Launching in 2012, the CISS is a four-part lecture series curriculum designed by SOM faculty and students that aims to expose high students to case-based IQ small group learning.

The introduction to medical education course starts with a four part lecture series followed by a mock IQ case study each day.  Three of the four lectures are given by M4s while the keystone lecture is presented by a SOM faculty member; this year the program featured Dr. Peter Aziz.  The lecture portion concludes with the high school students taking an exam to represent the knowledge they have gained via lecture which then qualifies them to shadow actual IQ sessions at the SOM. Students are then paired with M1s and spend two days attending IQ sessions and anatomy sessions with their mentors.  CISS is the brainchild of Dr. Robert Haynie, former Robbins Society Dean, and is funded by the Joan C. Edwards Charitable Foundation, and managed by the SOM Robbins Bridge Program.