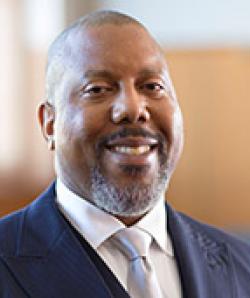 Before joining the Office for Inclusion, Diversity and Equal Opportunity, Christopher Leon Jones, Jr., JD, was the Director of Equal Opportunity at Wayne State University. His responsibilities included the implementation of the university's Affirmative Action/Equal Opportunity Program, which ensures that no person is discriminated against in employment, educational programs and activities on the basis of race, color, gender, national origin, religion, sexual orientation, marital status, disability or veteran status.

Prior to his appointment at Wayne State, Jones was the Deputy Executive Director of the Hawaiì Civil Rights Commission (HCRC). The HCRC is responsible for the enforcement of the civil rights laws of the State of Hawaiì prohibiting discrimination in employment, public accommodations, real property transactions, and access to services receiving State financial assistance.

As an attorney, Jones held positions in both the public and private sectors practicing law in Washington, D.C. with the Law Offices of Robert L. Bell, where he was responsible for the firm's appellate practice, and served as trial counsel in employment discrimination and civil rights cases. Prior to joining the HCRC, he was an Attorney-Advisor with the U.S. Department of Justice.

Jones is a veteran of the U. S. Air Force, serving as a member of the Judge Advocate General's Department. In his final assignment at Bolling Air Force Base, Washington, D. C., he served as Chief of Military Justice, supervising a criminal division for a unit that was responsible for over 30,000 personnel around the world. He was honorably discharged from the Air Force in the rank of Captain, and his military decorations include the Air Force Commendation Medal, with one oak leaf cluster, and the National Defense Service Medal.