Wine and dine in your home on Saturday, November 6, 2021, in support of the Research Institute for Children’s Health at Case Western Reserve University School of Medicine! This year, the institute will celebrate its sixth year of biomedical research focusing on improving the treatment of genetic diseases and disorders by supporting research in over 20 different diseases. Although there have been advances in understanding and treating certain genetic-based childhood illnesses, thousands of conditions still lack effective therapies.

If you cannot attend the event, you can donate through the ticket link on the registration site.

This year’s Giving Kids Hope will highlight the research that has been done thanks to the proceeds of the first five years of the event. Not only has the funding supported biomedical research but it has planted the seeds that may grow into the next big biomedical breakthrough by championing young scientists. This is the future of the institute’s research: the cultivation of research expertise, the generation and development of new and exciting ideas, and the encouragement to take risks and be bold in the lab. You can learn more about the senior and junior researchers you will hear from during the event below.

Guests will enjoy a three-course dinner with wine by Rosewood Grill, exciting raffles, and interviews with featured institute researchers. Research Institute for Children’s Health Director Mitchell Drumm, PhD, will emcee the event. The goal of this year’s virtual evening is to continue to celebrate safely while providing updates on how the institute has been able to carry out its mission with dozens of scientists across the School of Medicine and beyond who work to uncover genetic mutations that trigger serious problems in children.

TICKETS AND SPONSORSHIPS - GET YOURS TODAY!

There are two ticket options to enjoy the event from the comfort of your own home, with $125 dinner and wine and $25 virtual-only-donation tickets. Guests will be able to pick up their prepared dinners on November 6, 3-5 p.m., at the Rosewood Grill location of their convenience: Hudson, Strongsville, or Westlake. Guests are welcome and encouraged to host watch parties in their own homes!

Ticket sales close at noon on October 29. To purchase tickets for this event, please visit our registration site: www.2021givingkidshope.eventbrite.com.

Sponsorships: There are several sponsorship opportunities available to help contribute to the success of the event. Sponsorship support will not only underwrite the cost of the event, but will facilitate gene discovery, model development, and therapeutic assessment techniques. Please see below for additional information on the institute’s research efforts.

Sponsorship sales close on October 15. To partner with us on this exciting event, please visit our registration site: www.2021givingkidshope.eventbrite.com.

Purchase a sponsorship or ticket today!
LIMITED TICKET PREMIUM RAFFLES! - GET YOURS TODAY! 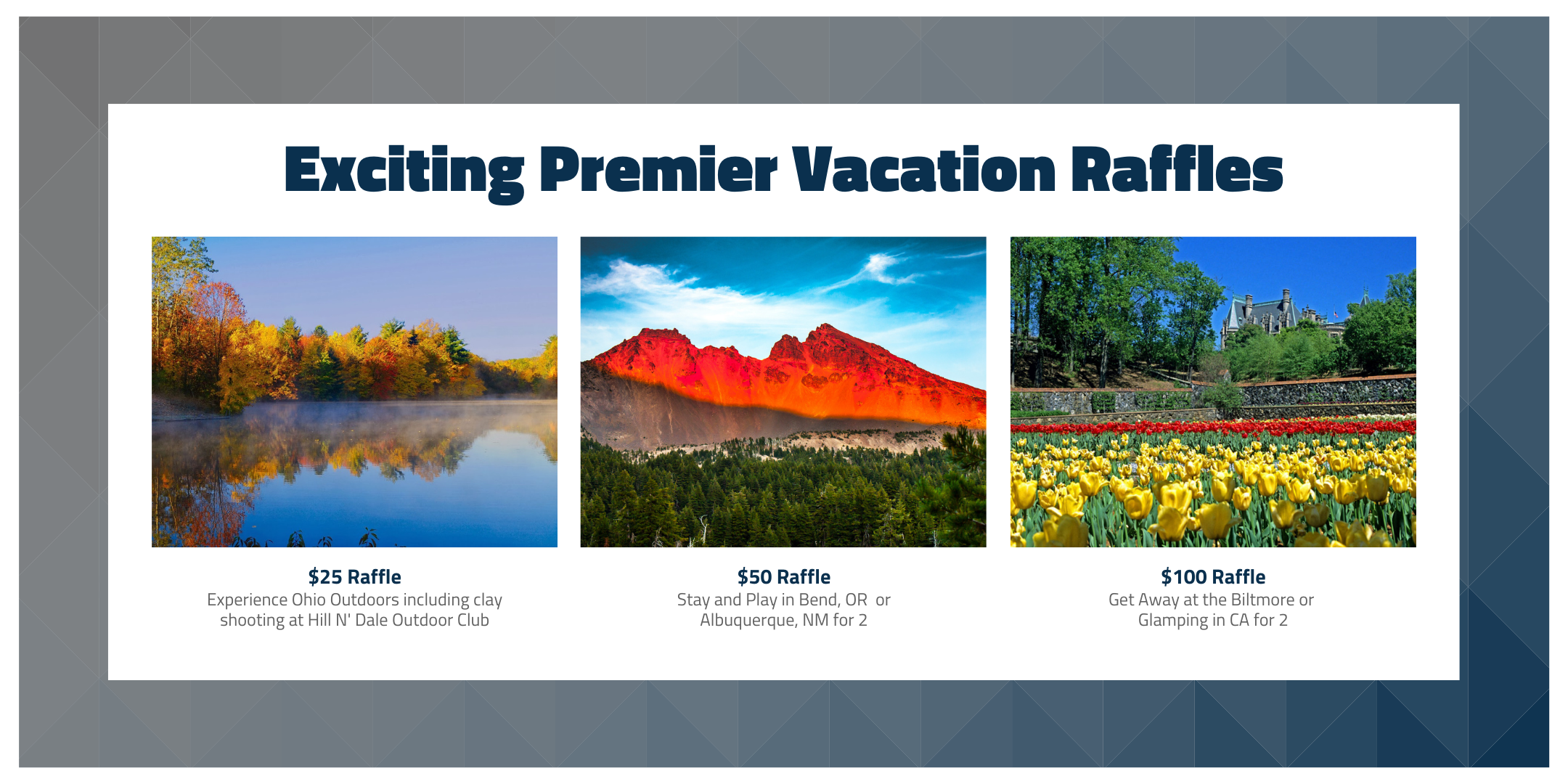 You can participate even if you can't attend the event! The winners need not be present.

Only 100 tickets are available for each premium raffle vacation! Don't miss your chance. To purchase raffle tickets, go to the registration site, click on tickets, then scroll to the raffles. The more tickets you purchase, the better your chances are! For more details including restrictions, click here.

$100 Raffle: Get Away at the Biltmore or Glamping in CA for 2 (Value $2,275)
Winner's Choice of one of the packages below! (airfare not included)

Guests will hear from the Research Institute for Children’s Health’s senior researchers who are working on new methods in genome engineering enabling them to recreate mutations that cause diseases. The researchers also act as mentors by encouraging young scientists to think of possibilities that can lead to novel treatments that impact the lives of future patients.

The institute is not only committed to supporting research, but also to young scientists who wish to focus their research on genetic-based childhood illnesses. Your support allows junior researchers to continue their path toward a meaningful research career, to have the opportunity to turn new scientific discoveries into therapies that benefit patients, and to uncover solutions to numerous childhood illnesses facing the world today. 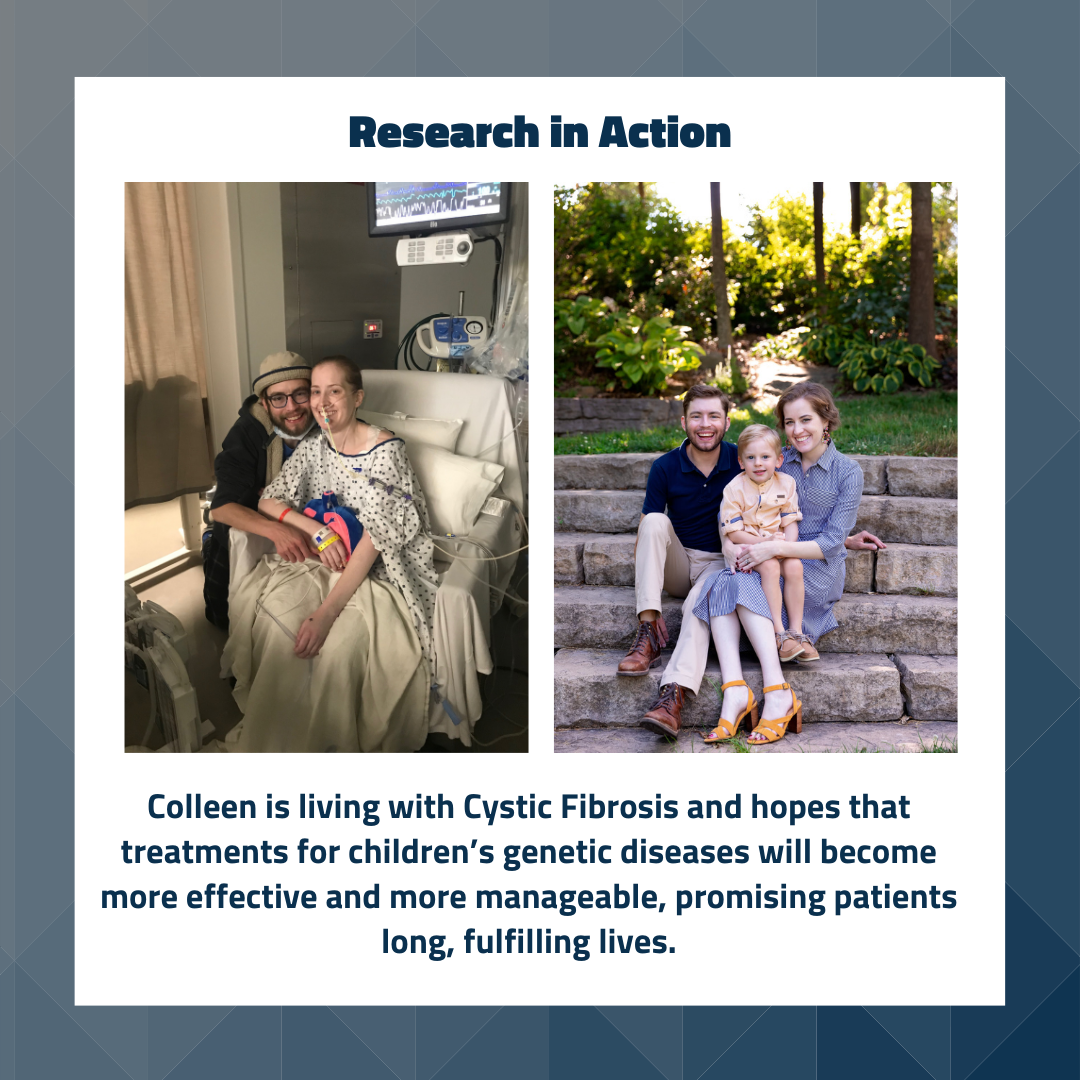 Colleen Weiler was born with cystic fibrosis (CF), a lethal genetic disease that progressively destroys the lungs. When Colleen was born, CF patients could expect to die by their 20s. To slow the rate of decline, patients must take handfuls of pills and do hours of airway treatments each day. Persistent lung infections require frequent hospitalizations, often lasting weeks at a time. When these interventions fail, organ transplantation is required for survival.

During college, she met Bryan, a fellow CF patient who was awaiting a bilateral lung and liver transplant. Their experiences with illness and loss taught them that life should not be squandered. After Bryan’s miraculous transplant, their son, Beckham, was born in 2017 thanks to IVF, egg donation, and surrogacy.

Within a year, Colleen’s health dramatically declined. She required oxygen supplementation and was hospitalized every two weeks for weeks at a time. Bryan brought Beckham to visit every day and they created fun traditions that their son still remembers. Eventually, she was listed for her own bilateral lung transplant. After a four-month wait, she received it and has been thriving ever since. Colleen is back in school and is a grateful mother, committed to honoring her gift of life. However, she still takes handfuls of pills and has frequent doctor appointments to prevent her body from rejecting her new organs. The Research Institute for Children’s Health provides hope for families suffering from genetic diseases like cystic fibrosis. It is Colleen’s hope that treatments for children’s genetic diseases will become more effective and more manageable, promising patients long, fulfilling lives.

Make a donation today.
YOUR SUPPORT IN ACTION 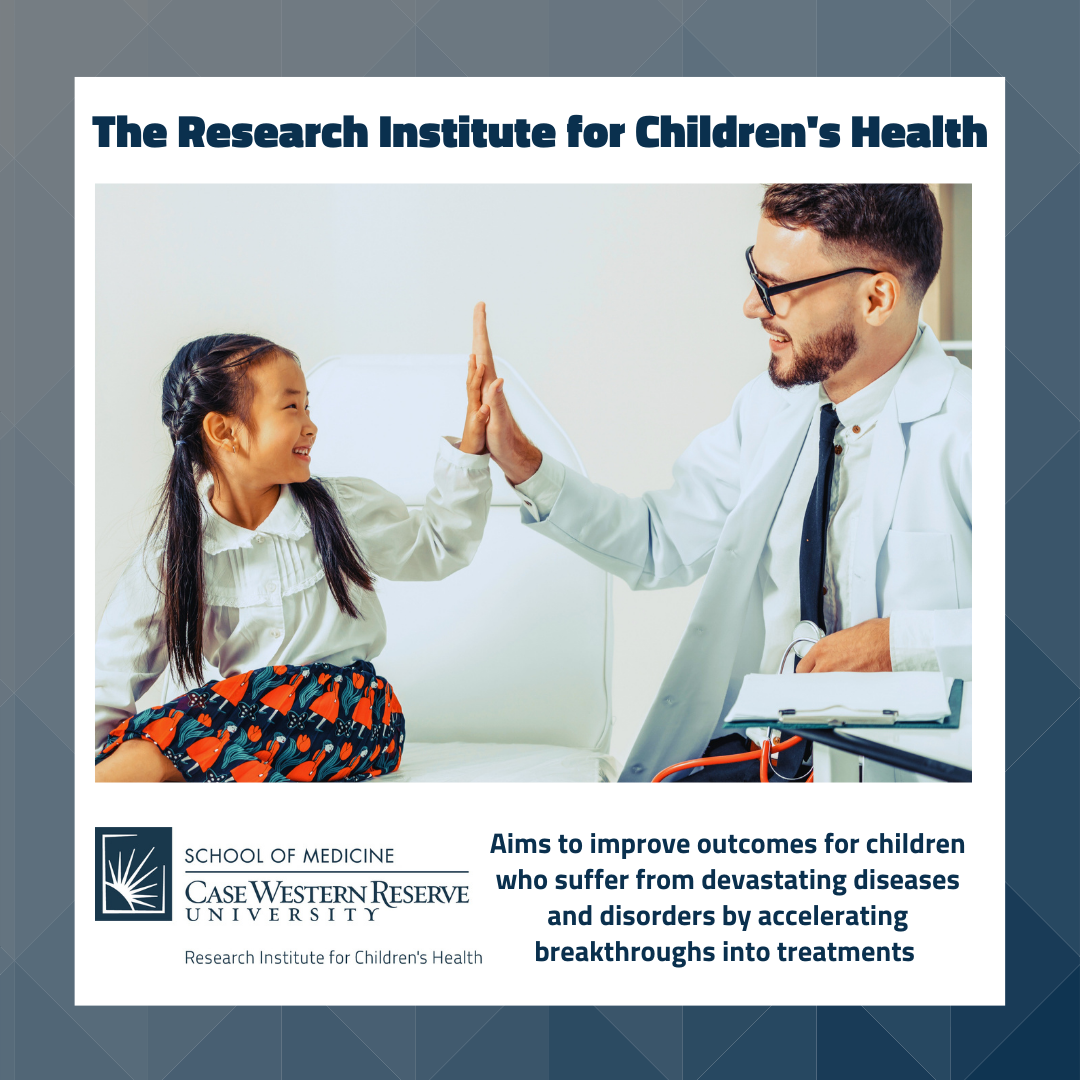 Our Roots: The institute traces its roots to the School of Medicine and its faculty’s pioneering work in cystic fibrosis, beginning in the 1950s. They were key players in the 1980s in identifying the gene that, when not working properly, causes cystic fibrosis and in the 1990s were the first to show that certain medications could be used to treat the defect. In the years that followed these tremendous breakthroughs, Case Western Reserve researchers led groundbreaking clinical trials to test the newest generation of drugs for cystic fibrosis.

Today, our scientists and physicians apply the knowledge gained in the fight against cystic fibrosis to other diseases including complex pulmonary disorders, metabolic and endocrine conditions, and neurological and intellectual disabilities.

Our Science: Thirty years ago, less than one percent of the human genome was mapped and understood. Now, thanks to genome sequencing, nearly 100 percent of the genome is characterized. As a result, researchers can discover the cause of a disease in weeks rather than years.

Two other processes are equally crucial to the institute’s work. New methods in genome engineering enable researchers to synthetically recreate mutations that cause diseases. Using robotics allows researchers to test tens of thousands of chemical compounds for potential benefit against the engineered disease-model cells. Promising agents can then more quickly be evaluated in clinical trials in patients.

Learn more about the institute.