Go to case.edu
One to One Fitness 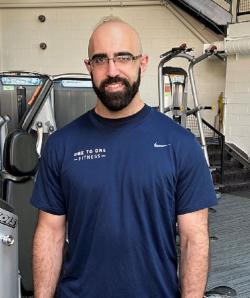 Rocco joined the One to One team in 2015. He has a degree in Biology from John Carroll University, where he was also an All American in shot put with the Track and Field team. Rocco received a USAW sports performance certification in 2016 and enjoys coaching and casually competing in Olympic Weightlifting, while also having great rapport with exercisers of all levels and interests. Rocco is also the throwing coach and strength and conditioning coordinator for the CWRU Track and Field team. In 2019, he coached the Division 3 National Champion in the women's hammer throw. Rocco believes that success requires consistent action toward attainable goals.