Meet Our Chief of Police

Jay H. Hodge was named Case Western Reserve University's Chief of Police in March of 2017 following a year and a half tenure as the department's Interim Chief of Police. His police career began at the East Cleveland Police Department in 1998. On September 1, 2006, Hodge became an officer with the Case Western Reserve University Police Department and has advanced through the ranks, serving as a Field Training Officer, Detective, and Sergeant. 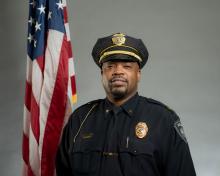 During Hodge's leadership tenure, he has been working to re-energize the police and security department and advance the reputation as a respected department through training, discipline, accountability, and stimulating creativity and growth. Hodge is committed to building the police department's internal and external relationships by focusing on strong customer service. It is one of his goals to make CWRU Police Department one of the top university police departments in the State of Ohio.