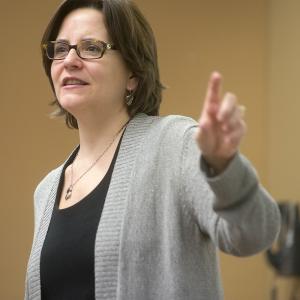 Photo by Mike Sands
Gabriella Celeste led the Schubert Center’s efforts to get the Cleveland Division of Police to adopt a policy to help avoid conflicts between police officers and young people.

With input from the Schubert Center for Child Studies, Cleveland police adopt a new policy for interacting with youth by Sheehan Hannan

A video portraying interactions between young people and police is part of an instructional toolkit produced by the Schubert Center and its partners. The Cleveland Division of Police adopted a new policy, advocated by the center, to prevent such interactions from escalating into conflict. Watch the video Courtesy of Pixel Park

It’s a scene that happens all too often. A few teenagers, gathered on a stoop, are chatting and hanging out. A police car screeches up to them, its lights and sirens ablaze. An officer springs out, wearing a badge and a gun, his scowl betraying deep suspicion. One hand is clenched into a fist. The other hovers near his weapon. He stalks up to the teens and leans toward them aggressively. He does not speak so much as growl. The teens fearfully hold their hands up, unsure of what to do.

It is incidents like this—involving overaggressive police interactions with youth—that Gabriella Celeste, policy director of the Schubert Center for Child Studies and co-director of the Childhood Studies program in the College of Arts and Sciences, has been working for years to prevent.

Since the killing of 12-year-old Tamir Rice by a Cleveland police officer in 2014 and the adoption of a consent decree to overhaul the Cleveland Division of Police (CDP) in 2015, Celeste and the center have pushed for new policies to protect young people. “Our office was committed to trying to see that children and youth were not left behind when it came to improving the community’s relationship with law enforcement and ensuring better outcomes in those interactions,” Celeste says.

Their effort bore fruit in February of last year, when the CDP became one of the few police departments in the nation to adopt a policy governing interactions between young people and police. The policy, which the center helped draft while engaging in discussions with the police department, mandates that officers keep interrogation times to a minimum, refrain from arresting children under 13 for nonviolent offenses, and approach youth on the street calmly and respectfully.

The new policy is a tacit recognition by the CDP that children and teenagers are in a unique developmental stage and thus require special protections. The part of a teenager’s brain that controls judgment and executive function, the prefrontal cortex, is among the last areas to fully develop, which makes youth more susceptible to misunderstanding and impulsivity. Without appropriate police training on these features of adolescence, interactions between police and young people can quickly escalate.

The policy seeks to defuse tensions by encouraging officers to approach teens in a measured way and refrain from using derogatory language or making fun—both of which can quickly spark a confrontation.

“Understanding where teens are developmentally helps inform officers’ expectations of young people,” Celeste says. “It helps them adapt and respond in a way that makes kids feel less threatened and more willing to engage. Officers should recognize that their very presence is going to heighten stress and that they have to be more attentive. They need to slow down and not take things personally.”

Former police chief Calvin Williams, who was in office when the policy was enacted, discussed the reasons for it during a virtual community forum last October.

“We put this policy in place to ensure that officers have a guideline, that they have the necessary tools in writing that basically dictate how we as a police agency will interact with the youth in our community,” Williams said. “It starts with having respect, being professional, being equal in their treatment, and also understanding and treating youth in an age-appropriate manner.”

To spread word of the new policy, the Schubert Center, with support from the George Gund Foundation, produced a set of instructional materials for officers, youth and community organizations. This “toolkit,” released last October, includes a five-minute video—made by local graphic designer and advocate Jamal Collins and Columbus-based animation studio Pixel Park—which features the scene with an overbearing officer.

The next scene, however, demonstrates how to turn that negative, aggressive interaction into a positive one. Instead of leaning forward as if in anticipation of conflict, the officer lounges casually on the hood of his cruiser. And instead of speaking to the group of teens in gruff tones, he asks calm, measured questions. The teens are still wary. But instead of cowering in fear, they keep their hands at their sides and start a conversation.

Cleveland-area young people participated in making the video, thanks to the center’s partnership with Earl Ingram, program director at the Boys & Girls Club of Cleveland at St. Luke’s Manor. Four teens—Nazli Collins, Ryan Greer, Caleb Harmon and Mabry Harris III—voiced characters who had struggled with negative police interactions in the past. The narrator is another local teen, Brice Peak, whom Celeste met at a police-community forum organized by the Boys & Girls Club. “Over the years, I’ve had so many conversations with young people,” says Celeste. “I felt it was really, really important to find a way to elevate their voices.”

Suggestions from local youth even shaped the substance of the video, such as having the animated officer change his posture to lean back on the squad car so as not to appear threatening. “The kids gave us that idea,” Celeste says. “We want officers to know that when they come out of a squad car and talk to kids, their body language matters.”

Celeste hopes the video and the rest of the toolkit will spark additional dialogue in local police departments, schools, community centers and other organizations that work with youth about how to make interactions between police officers and youth better. The center has encouraged its community partners to share the free materials on social media, using the hashtag #BetterPolicing4Kids.

The toolkit was released late last year, but its relevance has only increased as youth in Cleveland are buffeted by events that could place them in contact with police officers. These include a tide of local homicides, the victims of which are overwhelmingly young people, and a rising wave of mental health crises exacerbated by the COVID-19 pandemic.

“I’m grateful we got this policy adopted,” Celeste says. “I hope it’s one of many reminders for us adults about how we can’t rely on our system of last resort, our criminal justice system, and only pay attention to kids when they become a political problem. We need to pay attention to kids earlier, and in many other ways, before they become a problem to the rest of the community. Because they’re hurting. They’re hurting deeply right now.”

Sheehan Hannan (CWR ’14) is a freelance writer in Columbus, Ohio. He was formerly an associate editor at Cleveland Magazine.