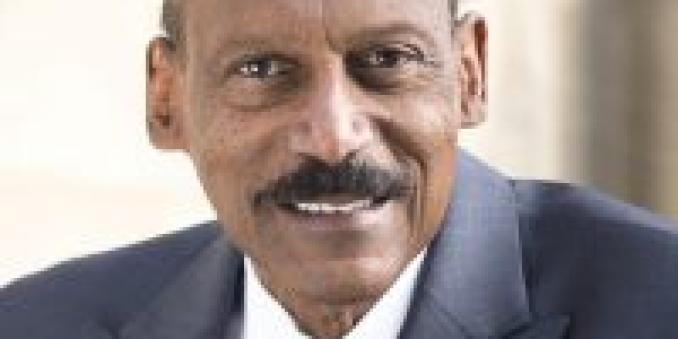 During commencement, Dean Davis will be presented with the The Herman D. Stein Distinguished Social Work Educator Award given to those with significant and recognized contributions to social work education and the profession, as evidenced by scholarly pursuits, leadership and academic excellence.

Larry E. Davis has spent his life and career dedicated to issues of race, civil rights, and social justice. He earned a bachelor’s degree in psychology from Michigan State University and a Masters in social work and a Masters in psychology from the University of Michigan. He then decided to work in the trenches, joining VISTA and spending three years in one of New York City’s poorest neighborhoods.

He returned to academia and attended the dual-degree program in social work and psychology at the University of Michigan. He pursued both degrees because he believed that that the methodology of psychology combined with the tools of social work would enable him to bridge the gap between analysis and application.

Over the years, Dr. Davis’ work has been funded by the National Institutes of Health, the National Institute of Mental Health and the National Science Foundation. He was the first African-American in any discipline to be awarded tenure at Washington University in St. Louis, where he was a Professor of Social Work and Psychology and the holder of the E. Desmond Lee Chair in Ethnic and Racial Diversity.

In 2001, Dr. Davis was recruited to the University of Pittsburgh, where he serves as Dean of the School of Social Work and holds the Donald M. Henderson Chair.  At Pitt, he also became the founding Director of the Center on Race and Social Problems which conducts applied social science research on race, ethnicity, and color, the first such center to be created in any American school of Social Work.

Dr. Davis has long been recognized as a leading scholar of the narrative about race in America and its role in social justice.   His academic life has been dedicated to the creation of solution-based dialogues that promote a more racially equitable society.

He has written, edited, or co-authored seven books: Race, Gender and Class: Guidelines for Practice with Individuals, Families and Groups (co-authored with Enola Proctor), Ethnic Issues in Adolescent Mental Health (Co-edited with Arlene Stiffman), Working with African American Males: A Guide to Practice (2000), Black and Single: Finding and Choosing a Partner who is Right for You (3rd edition 2004), and Measuring Race and Ethnicity, co-authored with Rafael Engel (2011), and Race and Social Problems, Restructuring Inequality, co-authored with Ralph Bangs (2014); Dr. Davis is also the co-editor in chief of the Encyclopedia of Social Work, 20th Edition.

His latest book Why Are They Angry With Us: Essays on Race is his most personal book—touching on themes of racial identity, internalized racism, and the legacy of slavery. It is published by Oxford University Press.

In addition, Dr. Davis is the founder and leader of REAP-a consortium of Race, Ethnicity, and Poverty centers from across the United States.

He is a member of the National Association of Social Workers, Council on Social Work Education, Society for Social Work and Research (SSWR) and the Inter-University Consortium for International Social Development (IUCISD). In 2015, he was inducted into the American Academy of Social Work and Social Welfare.