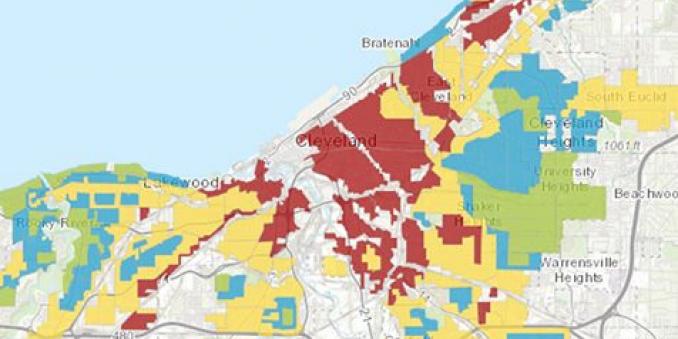 Many of the Cleveland neighborhoods that banks “redlined” almost a century ago have some of the city’s highest rates of poverty and crime. Although the lending practice of rejecting mortgage applications in specific neighborhoods—more accurately, to minorities—was banned more than 50 years ago, the effects of this so-called “redlining” still reverberate.

And, now this phenomenon can be illustrated in a visually compelling format, thanks to a team of researchers including Rachel Lovell, PhD, Misty Luminais, PhD, and Kristen Berg, MS, of the Begun Center for Violence Prevention Research and Education.

While working on a comprehensive project to examine unsubmitted sexual assaults in Cleveland, researchers found compelling contemporary patterns in the data relating to the legacy of housing discrimination.

“There appears to be a strong relationship between the history of redlining in Cleveland and the steady decline of neighborhoods,” Luminais said. “If you overlay the redlining maps and some of these other trends, it’s as if you’re looking at the same map.”

“Next, we will try to see whether there’s definitive causation,” Lovell said, “and then, of course, identify solutions.”

The Begun Center researchers worked closely with the Freedman Center for Digital Scholarship on the project.

On July 10, Lovell, Luminais, and Berg presented with Charlie Harper from the Freedman Center at MidTown Tech Hive to a group of 25 CWRU and community members on how a neighborhood’s built environment contributes to offending patterns for crimes like sexual assault, and how to use mapping tools to identify these trends.

*Data collected for this project originates from multiple sources, and includes both publicly available data and data made available exclusively to the project team and CWRU for educational, scholarly, and research purposes. Users seeking to copy, reproduce or distribute any data in the project that is not publicly available must seek written permission from the data owners.