"The Homeless" Sculpture Finds a Home at Mandel School 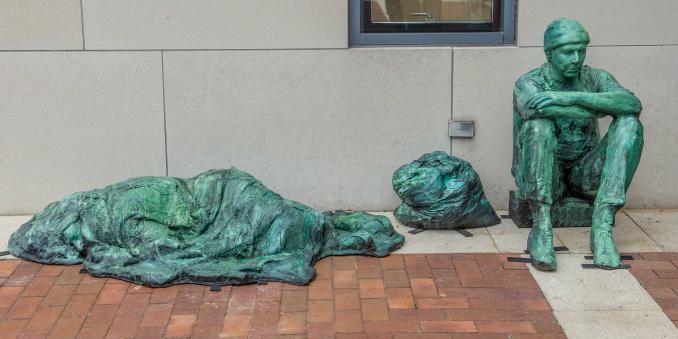 A sculpture titled “The Homeless” will now have a permanent home in Cleveland.

The statue was erected and unveiled at the entrance of Case Western Reserve University’s Jack, Joseph and Morton Mandel School of Applied Social Sciences Thursday.

“From today forward, when students, staff, faculty, alumni and community members enter the Mandel School, they will be greeted with an unmistakable reminder of the school’s commitment to social justice,” said Grover C. Gilmore, PhD, Jack, Joseph and Morton Mandel Dean in Applied Social Sciences. “This sculpture represents a scene that is far too common in our urban landscape.”

Segal was an American artist credited for introducing the use of plaster bandages as a medium for sculpture. As his career progressed and he gained worldwide notoriety, Segal began painting his works, and later cast them in bronze.

“Depression Breadline,” one of Segal’s more noted bronze works, is on view in Washington, D.C., at the Franklin Delano Roosevelt Memorial. In his lifetime, Segal created more than 1,000 pieces of art, which can be found in North and South America, Europe, the Middle East, Japan and Korea.