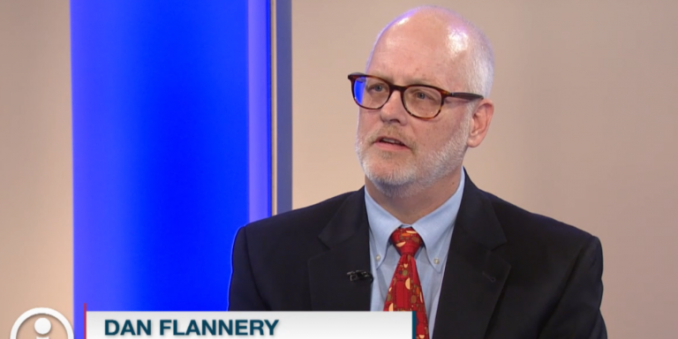 “This week marks one month since 17 students and staff members were killed in a shooting at Marjory Stoneman Douglas High School in Parkland, Florida,” host Rick Jackson began this week’s episode of WVIZ/PBS Ideas. “In memory of those victims, students across the country are planning to participate in a National School Walkout Wednesday morning,” he added, referencing March 14.

Begun Center director Daniel J. Flannery, PhD, joined Jackson to discuss the Call For Action to Prevent Gun Violence in the United States of America, created by Flannery and 18 other violence prevention experts and endorsed by dozens of national education and mental health organizations and universities.

“We came together quickly after that incident and said, enough is enough,” Flannery said of his involvement in the statement. The Call For Action is “based on our collective expertise and what we know from both our experience and from the scientific literature.”

“It is a public health approach to gun violence,” Flannery explained. “This is [similar to] the framework for how we look at diseases. [For example, with] a particular illness like the flu, we have strategies in place to immunize, target those with compromised immune systems, and place-based strategies.”

“We can apply some of these same strategies to school-based violence,” Flannery noted.

The three levels of prevention include universal approaches promoting safety and well-being for everyone; practices for reducing risk and promoting protective factors for persons experiencing difficulties; and interventions for individuals where violence is present or appears imminent.

The approach of Flannery and his colleagues work to “soften” schools, as Jackson pointed out, but Flannery responded that this approach does not preclude approaches that may “harden” schools like metal detectors, school resource officers, and environmental design. There is no one simple solution, according to Flannery, who noted that while reducing risk factors is important, it is equally imperative to increase social competencies among youth. Problem-solving skills and a heightened ability to deal with mental health and anger issues are among these competencies.

Listen to Flannery’s interview on ideastream

This is one of many requests Flannery has received in the past month to lend expertise to this issue, including an appearance on Sound of Ideas, a radio appearance on Global News Radio 770 CHQR in Alberta, Canada, and an update to an article in The Conversation.