Mandel School in the Media: January and February 2019 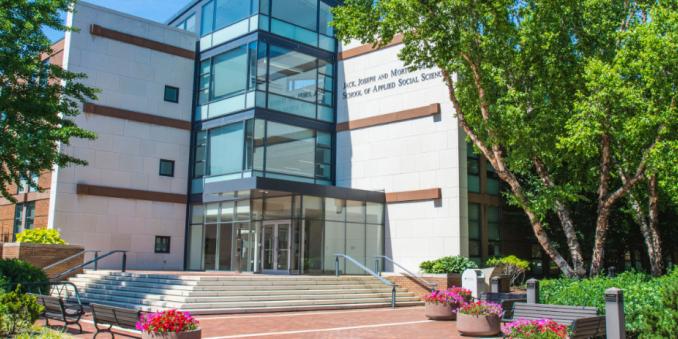 Check out some of the top stories from January and February:

Jan. 6
‘An Uphill Battle’: Lead Poisoning Stunts Students’ Learning While Cleveland Leaders Fail to Tackle Lingering Problem
Cleveland Plain Dealer
More than a quarter, 25.7 percent, of the kindergartners screened in a recent study by the Mandel School’s Center on Urban Poverty and Community Development had a history of lead poisoning at or above the level where public health officials recommend action.
Lean about how lead affects learning

Jan. 7
High-Quality Pre-K Doesn’t Get Most Lead-Poisoned Children Ready for Kindergarten
Cleveland Plain Dealer
While high quality preschool has been shown to help particularly children who have cognitive or developmental deficits related to trauma or exposure to poverty, recent research by the Mandel School’s Poverty Center and Cuyahoga County’s early childhood initiative Invest in Children shows that even long exposure is not enough to help kids who have lead poisoning catch up with their peers.
Read more about lead and kindergarten readiness

Jan. 7
STUDY: 1 in 4 Kindergartners at Cleveland Schools Have Been Exposed to Lead
WKYC Channel 3 Cleveland
The problems with lead in Cleveland have been well-documented. The city is one of the worst in the country when it comes to children being exposed. Associate Professor Robert Fischer of the Mandel School’s Poverty Center is behind a study that shows just how bad the problem is.
Read more about these important findings

Jan. 7
Blaine Griffin Says Lead Legislation still 'A Work in Progress,' Denies Mayoral Implications of Delay
Cleveland Scene
The Cleveland Plain Dealer reported that as leaders have debated how best to tackle the lead issue, more than 4,400 children have been poisoned at or above the Center for Disease Control's lead threshold and will enter kindergarten at a potential disadvantage. Associate Professor Rob Fischer led a recent study showing that elevated lead levels are indeed associated with ongoing academic problems.
Get the details about Cleveland’s lead legislation

Jan. 8
Study Says Children in Northeast Ohio at High Risk for Lead Poisoning
WOIO Channel 19 Cleveland
Researchers at the Mandel School’s Poverty Center, in partnership with the Cuyahoga County’s Invest in Children, found that one-fourth of kindergartners in Cleveland public schools have a history of elevated lead in their blood.
Learn about the prevalence of lead in Cleveland

Jan. 8
Study: 25 Percent of CMSD Kindergarteners Have Been Exposed to Lead
Fox 8 Cleveland
A study led by researchers at the Mandel School’s Poverty Center, says Cleveland has markedly higher lead exposure among children compared to many other communities. Results show the primary threat of lead exposure comes from leaded paint in homes built before 1978 when there is deterioration and lack of maintenance.
Learn more about lead exposure and its effects

Jan. 9
Study Finds High Levels of Lead in Cleveland Children, Potentially Impacting Their Development and Behavior
WOIO Channel 19 Cleveland
A new study is shedding light on a disturbing trend: high levels of lead in Cleveland’s young children. That recent study, from the Mandel School’s Poverty Center, puts a spotlight on the ill effects on children and their ability to learn and behave well.
Hear from Rob Fischer about the effects of lead

Jan. 9
REPORT: Cleveland Has Lead Levels Higher Than Flint
WOSU, Columbus NPR affiliate
WOUB, Athens NPR affiliate
A recent report by the Mandel School’s Poverty Center found 10.7 percent of kids born in 2012 who were screened for lead in Cuyahoga County had an elevated blood lead level by age 5. In Cleveland, 17 percent of kids screened for lead showed elevated blood lead levels.
Get details about high levels of lead in Cleveland

Jan. 11
A Report Shows Lead Levels in Cleveland Are as High as Flint’s
Pacific Standard Magazine
According to a report released this week by the Mandel School’s Poverty Center, children born in Cuyahoga County tested for higher lead levels than their peers across the state. The study looked at the lead levels of 10,000 kindergartners over a three-year period. The findings were bleak.
Read more about lead in Cleveland

Jan. 21
Cleveland to Announce Goal to Become Lead-Safe by 2028
Ideastream
Following Mandel School Poverty Center research showing the gravity of Cleveland’s lead problem, Cleveland will announce a goal to bring down the rate of childhood lead poisoning and make the city “lead safe” by 2028, Council President Kevin Kelley said in an interview.
See what the plans entail

Jan. 22
Cleveland Officials Discuss Lead Safety After Study Shows Elevated Levels in Children
Fox 8 Cleveland
Cleveland officials announced plans to combat lead exposure, particularly in children, during a news conference. A recent study from the Poverty Center at the Mandel School found children in Cleveland had higher exposure to lead than compared to other communities.
Learn about how the study is igniting change in Cleveland

Jan. 24
New Coalition Aims to Make Cleveland Lead-Safe
Sound of Ideas
Influenced by a recent research report from the Mandel School’s Poverty Center, a coalition of Cleveland's healthcare, environmental, education and philanthropic organizations have announced an effort to work together to drastically reduce the number of children exposed to toxic lead over the next decade.
Hear about their plans

Feb. 20
Awaiting the Lead-Poisoning Tipping Point
Rolling Stone
Researchers at the Mandel School’s Poverty Center published two new studies in coordination with a Cuyahoga County early-childhood initiative. Rob Fischer discusses the results and suggests opportunities for improvement.
Read on to learn about the lead issue and recommendations for Cleveland’s future

Feb. 21
Cleveland 19 Investigates Downtown Rape of Woman
WOIO, Channel 19 Cleveland
Rachel Lovell of the Mandel School’s Begun Center discusses how sexual assaults by strangers tend to be in situations of opportunity.
Watch the story to learn about serial offenders

Jan. 6
Living On: Cleveland Seniors ‘Get Freedom Back’ as Age-Friendly Efforts Grow
Cleveland Plain Dealer
Getting freedom back for seniors, in all sorts of ways, is the point of the Age-Friendly City movement, a global network organized by the World Health Organization. Cleveland became a member of the network in 2014 at the urging of M.C. “Terry” Hokenstad, emeritus professor in the Mandel School and an expert on the issues of aging.
Learn about Age-Friendly Cities

Feb. 5
State Rep. Introduces Domestic Violence Bill Named After Slain School Teacher Aisha Fraser
WEWS, Channel 5 Cleveland
Nearly 50 percent of domestic violence victims in Cleveland are at high risk of homicide or severe assault, but only one in three domestic violence abusers in Cuyahoga County spends a day behind bars. Jeff Kretschmar is part of the study and the Domestic Violence High Risk team at Case Western Reserve University’s Begun Center at the Mandel School, where researchers, domestic advocates and Cleveland police officers all come together. According to the team, the signs were there in Aisha Fraser’s case.
Read about the proposed “Aisha’s law”

Feb. 13
Blackface in America
Sound of Ideas
The Governor of Virginia is under fire for wearing black face in 1984, prompting the attorney general to admit his own blackface transgression in 1980. The Secretary of State in Florida resigned after a 2005 blackface photo surfaced. The Mandel School’s Adrianne Crawford Fletcher discusses the historically racist and dehumanizing intent of blackface, and why there are still so many who don't believe it's always offensive.
Tune in to hear the perspectives

Feb. 13
Browns signing of Kareem Hunt shows sports lags in MeToo movement
Cleveland Plain Dealer
The Cleveland Browns on Monday signed football player Kareem Hunt, who last year was caught on camera shoving and kicking a woman at the Metropolitan at the 9 hotel. Dan Flannery, of the Mandel School’s Begun Center for Violence Prevention Research and Education, discusses second chances.
Hear his advice for Hunt and the Browns

Feb. 15
Police in Cleveland Take on Role of Social First Responder
WEWS, Channel 5 Cleveland
Police officers in Cleveland have a new crime-fighting tool in their arsenal. The youth violence initiative is believed to be the first of its kind in the country. It brings together two different police departments, a behavioral health facility and the Mandel School’s Begun Center.
Learn more about this new initiative

Feb. 15
When Kids Don’t Want to Clean Up
Psychology Today
Teaching children to organize their possessions is a parenting skill; like many others, sometimes parents need to learn the skill themselves before they can aid their children. When parents think about why they respond so negatively if a child does not put dirty clothes in the laundry hamper or hang up clean clothes, they invariably respond that if they themselves had done that, they would have been harshly disciplined (the word “beaten” is often used), says Jane Timmons-Mitchell of the Mandel School’s Begun Center for Violence Prevention Research and Education.
Read her advice