October Is Domestic Violence Awareness Month. See How the Mandel School Is Approaching the Topic 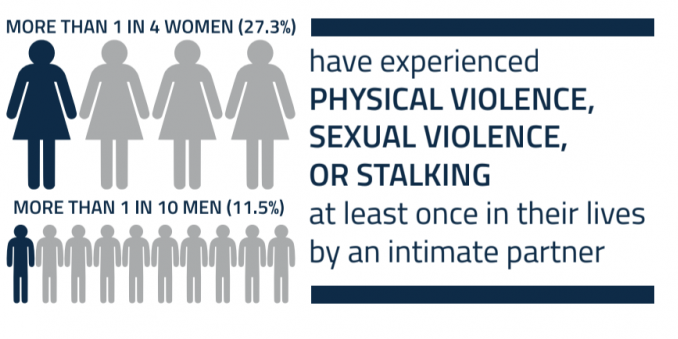 Domestic violence is a serious, preventable public health problem. Estimates show that more than 1 in 4 women (27.3 percent) and more than 1 in 10 men (11.5 percent) in the U.S. have experienced physical violence, sexual violence and/or stalking by an intimate partner in their lifetime. Domestic violence imposes a substantial economic burden to the society at large costing the United States $5.8 billion dollars each year, according to the National Center for Injury Prevention and Control.

Married or cohabiting couples who have children are reported to experience the highest likelihood of domestic violence. In the United States, it has been estimated that more than 15.5 million children each year are exposed to at least one episode of domestic violence, with more than one-quarter of children being exposed to domestic violence in their lifetime. Furthermore, children’s exposure to domestic violence imposes a significant burden to localities, states and society at large, made explicit over the child’s lifetime and over a wide range of behaviors and outcomes, including increased use of social services, healthcare utilization, educational outcomes, workforce productivity and criminal behavior. It is estimated that a domestic violence exposed child’s average costs to the national economy over their lifetime will reach nearly $50,000—totaling over $55 billion for all children exposed to IPV in the U.S.

October is domestic violence awareness month, and there is a strong research presence at the Jack, Joseph and Morton Mandel School of Applied Social Sciences at Case Western Reserve University focusing on this important issue. Below are a few of the recent projects focused on preventing domestic violence or mitigating the impact of domestic violence.

Bukach is working with the Greater Cleveland Elder Abuse/Domestic Violence Roundtable, a multidisciplinary group of professionals and citizens in Cuyahoga County dedicated to education and advocacy around the interface of elder abuse and domestic violence, known as domestic violence in later life. Earlier this year, the group sponsored an introductory training on trauma for a broad network of professionals who serve older adults.

Each October, the roundtable presents a workshop in recognition of National Domestic Violence Awareness Month. The 2018 workshop took place Friday, Oct. 12 at St. Augustine Health Campus and focused on policy changes affecting domestic violence in later life, as well as local resources for victims and the professionals who serve them.

Another project related to domestic violence is Pay for Success.

Holmes’s NIH- and ACYF-funded research has established that there are long-term, detrimental effects for children when they are exposed to domestic violence before the age of 5, indicating that interventions need to be targeted toward young children in order to prevent future problems (Holmes, 2013; Holmes, Voith, & Gromoske, 2015). She also has identified that that more than 40 percent of children who are exposed to domestic violence or maltreated have resilient development of prosocial skills and academic functioning over time, and that protective factors, such as caregiver responsiveness significantly contributed to these resilient outcomes despite experiencing domestic violence exposure or child maltreatment (Holmes, Yoon, Berg, Cage, & Perzynski, 2018a; Holmes et al., under review).

Building on this research, Holmes recently completed a multi-study statewide project funded by HealthPath Foundation of Ohio to examine the effects of domestic violence exposure on Ohio’s children, identify the resources and services available to these children and families, and estimate the impact of child exposure to domestic violence on Ohio’s economy. This study made the nation’s first estimate of the economic burden of childhood exposure to domestic violence, which amounts to $55 billion dollars a year to the U.S. economy ($2.2 billion to Ohio and nearly $45 million to the City of Cleveland) in the form of increased healthcare costs, increased crime costs and reduced productivity (Holmes, Votruba, Richter, Berg, & Bender, 2018b). The results of this multi-study statewide project were written in a public-facing white paper with recommendations for how the state of Ohio can better serve children exposed to domestic violence (Holmes, Votruba, Richter, Berg, & Bender, 2017).

The Begun Center serves as the research and evaluation partner to Cuyahoga County and the Domestic Violence Center for the Department of Justice funded Domestic Violence Homicide Prevention (DVHP) Initiative, working in partnership to reduce domestic violence homicides by effectively identifying potential victims and monitoring high-risk offenders. The DVHP Initiative is modeled after programs in Massachusetts and Maryland, where the use of coordinated teams of law enforcement, prosecutors, health professionals and victims’ services significantly reduced the domestic violence homicide rate.

The Cuyahoga County DVHRT accepts referrals for high-risk victims from the Cleveland Division of Police and domestic violence service providers in the community. In order to identify high-risk victims, Cleveland police officers use an 11-item lethality assessment designed for law enforcement to administer to the victim at the scene of an intimate partner incident. If the victim is at high risk for lethality, the case is referred the team. Domestic violence service providers in the community are also able to refer cases they feel are high risk.

Each month, members of the high risk team meet to discuss new and ongoing cases. Domestic violence detectives and victim advocates co-present the incident, discuss the facts from the police report, and provide case details such as the current location of the offender and victim, relationship history, involvement of other family members (in particular, children), any known patterns of violence, and the offender’s criminal record. Further discussion with all stakeholders includes upcoming court dates, pending charges or charges filed, outcomes of court cases, referrals to victim services, and how best to keep the victim and any family members safe.

In July of 2018, researchers from the Mandel School’s Begun Center for Violence Prevention Research and Education, in collaboration with a colleague from Cleveland State University’s School of Social Work, published “Understanding Intimate Partner Sexual Assaults: Findings from Sexual Assault Kits” in the Journal of Aggression, Maltreatment & Trauma.

Additionally, Lovell is involved in a project called Virtual Advocate: Giving Voice to the Unheard, the purpose of which is to assess the social, commercial and technical viability of the Internet of Things (IoT) based Virtual Advocate project.

This innovation leverages voice-activated, commercial off-the-shelf technology to protect people at risk of domestic or dating violence and sexual harassment through use of a predetermined safe-word or phrase from a person in peril. Upon voice-activation, the Virtual Advocate would execute a predetermined sequence of protective events. The Virtual Advocate has enormous potential to prevent harm, provide protection if harm is initiated, and provide evidence of the event, thereby mitigating the issue of “she said/he said” hearsay prominent in sexual violence or harassment. While these features hold substantial benefit over existing personal safety apps, the technical, legal, ethical and law enforcement obstacles require attention.

Thirdly, Lovell is studying evaluations of organizations that serve survivors of intimate partner violence to improve services provided. Forward Focus is a housing and financial assistance program that works under the umbrella of Families at Risk, a part of the Jewish Family Service Association of Cleveland.

Forward Focus works closely with Domestic Violence Survivors to help domestic violence survivors with housing and/or financial instability due to domestic violence and the aftermath of leaving their abuser. In addition to physical abuse, economic abuse is a common tactic abusers use to manipulate and control their partners (Adams et al. 2008; Fawole 2008). Victims may come to the shelter with poor credit, little access to financial resources and job instability due in large part to the abusive relationship and financial control of their partners. In fact, economic concerns have been reported as one of the top obstacles to leaving one’s abuser (Zorza 1991; Sanders and Schnabel 2006; Turner and Shapiro 1986; Postmus et al. 2012).

Forward Focus directly provides rental assistance and financial planning and education. It works with community partners through the Jewish Family Service Association of Cleveland and the neighboring community to address all other needs, serving as a liaison and advocate for their clients.

The Begun Center has worked with Forward Focus in the past to build their capacity to effectively evaluate their impact by helping them identify and streamline useful data collection tools, build and maintain a database and run reports to describe their work and are currently working with them to improve their data collection process. Lovell and her team are conducting a more involved qualitative and quantitative analysis of their impact.

Voith’s work recognizes the limited success demonstrated by interventions with perpetrators of intimate partner violence, ultimately failing victims. . Gaining a deeper understanding of life experiences that contribute to men's use of violence, such as adverse childhood experiences, and their current life conditions that enhance or diminish the risk of intimate partner violence is essential to serve victims and their families.

To that end, Voith has partnered with the Cuyahoga County and Cleveland Municipal Court Probation Office in 2017 to examine  biological, psychological, social and physical developmental factors with men participating in the largest batterer intervention program in the county. Preliminary results show men have experienced extremely high levels of adversity and trauma, have substantially higher levels of mental health issues and low levels of social support. Implications from this work can inform the enhancement of existing batterer intervention programs in Cleveland.