Talking to Our Children About Gun Violence, Assuring Them They Will Be Safe 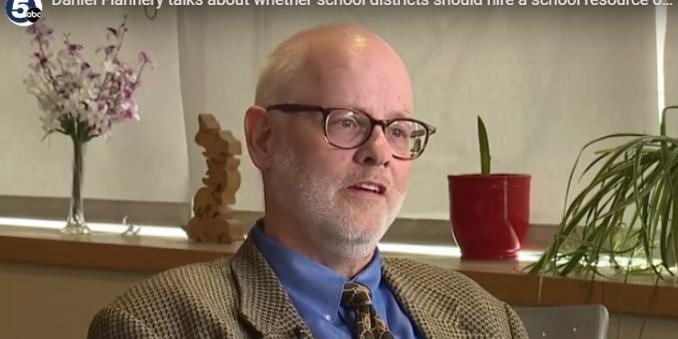 Since the February 14 tragedy in Parkland, Begun Center director Daniel J. Flannery, PhD, has received numerous requests from a variety of local and national media outlets, focusing mainly on two questions: How do we protect our kids, and how do we talk with them about school violence?

In May, News 5 Cleveland asked for Flannery’s input on an investigative piece on school resource officers (SROs). They posed the question: Who’s protecting our kids? In Chardon, they found SRO Mike Shaw, who serves as vice president of the Ohio School Resource Officers Association. More broadly, however, they found that Ohio has no requirements regarding who schools hire to protect students.

Flannery weighed in that while SROs won’t necessarily solve all of a school’s problems or deter any act of violence that may occur, he would certainly prefer and advise the use of a trained SRO specifically assigned to the school as opposed to volunteers or rotating law enforcement officers.

Flannery added that while there is anecdotal evidence that a law enforcement officer’s presence improves student perception of police and feelings of safety inside schools, the evidence does not suggest a correlation between SRO presence and full prevention of crime in schools, including gun violence.

Flannery was clear that a school should have a comprehensive violence prevention plan that includes mental health workers and threat assessment teams.

Read and watch the full report.

The Cleveland Plain Dealer ran a story the following day as part of a larger series called “Gun Violence: An American Conversation,” where it was noted that, after the tragedy in Parkland, a majority of teens said they worried about a possible shooting at their schools, according to the Pew Research Center. Parents shared the concern.

How do we address this with our kids? While stressing that a school is safe, parents shouldn’t dismiss a child’s concerns, Flannery told the Plain Dealer in a telephone interview. And it’s important for children to know that if they see something that concerns them, they should tell a teacher or other adult, he and others said. “And you say ‘Look, sometimes bad things do happen,'” Flannery said. “‘But when you go to school, you are going to be safe, and we will do everything to keep you safe.'”

The story was subsequently picked up nationwide, by the New Orleans Times-Picayune, the Oregonian, the Massachusetts Republican, the Pennsylvania Patriot News, the New Jersey Star Ledger, and the Syracuse Post-Standard.