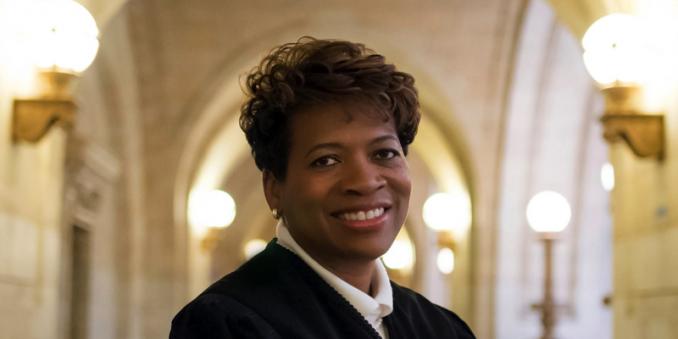 The posts are the culmination of long and diverse legal careers for the Northeast Ohio natives. A member of the Mandel School's Visiting Committee, Stewart became Ohio's first elected female African-American Supreme Court justice after a career that included 12 years as an 8th District Ohio Court of Appeals judge. She also worked as a faculty member and administrator at three Ohio law schools and served as director of student services at Case Western Reserve's School of Law. Dallet spent nearly a decade as a Milwaukee County Circuit Court judge after working as an assistant district attorney. She also served as a special assistant U.S. attorney for the Eastern District of Wisconsin and an adjunct professor at Marquette University's law school.

Melody Stewart (MS): When I was working for a healthcare management company [after college], the vice president of the company was in law school. He would set his law books down on the counter in the front office, and I would occasionally flip through them and read the cases. And it was just fascinating to me. ... [Later,] I applied to law school on a whim.

Rebecca Dallet (RD): I had a very formative experience at Shaker Heights High School. We "arrested" [our teacher] and got to do a mock trial. I was sitting with [an actual] judge for the day and got to see what it was like. ... It was really something that stuck with me about how meaningful and important it was to be a judge.

MS: When I got in the doctoral program [at the Mandel School], I thought all the statistical courses would kill me, because in college the only courses I took that had numbers in them were things like "The Physics of Sound and Music" and "18th Century Counterpoint." So I didn't know algebra or advanced stats or quantitative analysis, and I thought that would be the nail in the coffin for me. But I was able to pick subjects that were law-related and do all of my research in law and social-science-related subjects.

RD: I've always liked school, but I really liked law school. I loved my criminal law classes. Lewis Katz [JD, John C. Hutchins Professor of Law] was one of my favorite professors. I got to be friends with a lot of my fellow students. And I wound up meeting my husband [Brad Dallet, JD (LAW '94)]. So it really was a very important place.

RD: The reason being a judge is meaningful to me is the impact that I have on people. As a trial judge, you see the impact you're having—affecting one person at a time—and on a Supreme Court level, it's the broader view of being able to impact the law that affects everyone in the state.

MS: I was perfectly content remaining on the Court of Appeals. But when I ultimately did decide to run, it was just that the effort and the ultimate result—should we be successful—was really bigger and greater than me, and so I felt that I had to do it, regardless of what the outcome would be.

RD: The day that marriage equality was upheld in Wisconsin was my proudest moment as a judge. I was coming back from a trip with my family and I heard it on the radio. I went home, grabbed my robe and went down to the courthouse. I got to marry people for the first time legally who had been committed to each other for years.

MS: The decision that I am most proud of is a dissenting opinion that I wrote that had some impact, ultimately, on a man being exonerated for a crime he didn't commit. And I remember when he was released, I said to myself, if I never render another judicial decision on any case, having written that dissent was worth my entire career.