In Memory of Morton L. Mandel: A Visionary Philanthropist Who Reshaped Leadership and Social Change 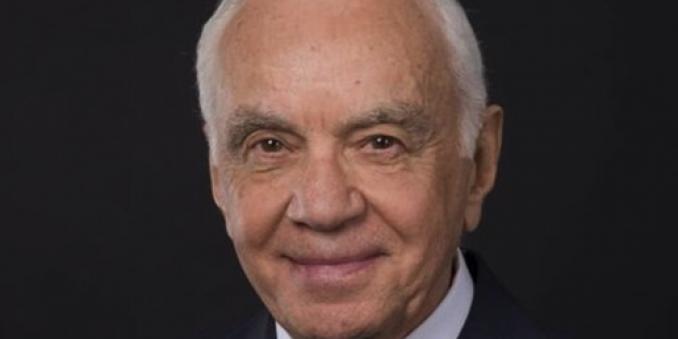 The Jack, Joseph and Morton Mandel School of Applied Social Sciences joins organizations and individuals throughout the world in mourning our dear friend and benefactor Morton L. Mandel, who died October 16 at his home in Florida. He was 98.

His motto was “invest in people with the values, ability and passion to change the world.” And change our world he did.

In August, Mort Mandel was awarded the 2019 Carnegie Medal of Philanthropy, a prestigious international honor that recognized his influence on the trends, structure, and wisdom of future philanthropy and his commitment to using his wealth for the benefit of mankind.

With his beloved brothers, Jack and Joseph, Mort Mandel provided the Mandel School with more than his name and his unwavering support for more than 50 years. As with every partner in his philanthropy, the Mandel School received his thoughtful guidance, visionary insights, and careful cultivation of a culture of service and leadership.

“I feel fortunate to have benefitted from his wisdom. Mort Mandel cared deeply about the training of social workers and nonprofit leaders who have the ability and passion to change the world,” said Grover C. Gilmore, PhD, the Jack, Joseph and Morton Mandel Dean in Applied Social Sciences. “He enjoyed meeting with students and hearing about their dreams and accomplishments. Our alumni are the living legacy of his dream for a better world.”

His impact reverberated throughout Northeast Ohio and worldwide.

“Mort Mandel believed fiercely in the extraordinary impact that a single individual can have,” Case Western Reserve University President Barbara R. Snyder said. “In acting on that belief—in his family’s philanthropy and business—he transformed lives on our campus, in Cleveland, and around the globe. His legacy will affect generations to come.”

“There are many institutions in [Israel] that bear his name and will continue to do so, in the fields of research, education, science, society and economics,” Reuven Rivlin, President of Israel, told the Israeli News Agency. “For over 50 years, the Mandel Israel Foundation that he developed with his brothers Jack and Joseph has been developing new generations of leadership, social and educational entrepreneurs from all parts of Israeli society – Jews and Arabs, religious, ultra-Orthodox, and secular.”

The youngest of four siblings, Mandel grew up in Cleveland and attended Glenville High School. His family struggled financially, but his mother always found ways to help others in need. Thanks to a scholarship, Mandel was able to enroll in Adelbert College (later part of Case Western Reserve), but left in 1940 after his brothers agreed to buy their uncle’s auto shop for $900. Mandel later enlisted in the U.S. Army, and posted exam scores so high that the military sent him to Pomona College and the University of California at Berkeley for coursework relevant to his service.

His time as a soldier also included learning outside the classroom. One assignment involved transporting 15 wounded soldiers from a hospital in Tennessee to one further south. During the trip they stopped for lunch and found that the restaurant would not serve the African-American soldiers among the group. Mandel was so angry that he had all 15 get lunch from a street vendor, where he had to pay from his own pocket rather than be able to use a military voucher.

The lesson, he later recalled, “[m]anagers who would be effective leaders must have principles and do the right thing.”

As the general manager and later Chairman and CEO of the auto parts company Mandel exercised such exceptional leadership that in 1996, Premier Industrial Corp. merged with a British firm in a $3 billion transaction. In 2012 he published It’s All about Who, a book distilling his experiences into practical guidance for others in leadership roles.

“The forces that influence an institution the most,” he wrote, “are the human forces—the people who manage it, inspire it, lead it, and build it.”

Inspired by their mother’s generosity of spirit, and his brothers created the Jack, Joseph and Morton Mandel Foundation in 1953—even when though their fledgling auto parts business was just beginning to find its way and had not yet gone public. Its mission, later codified in writing, was Mort Mandel’s personal mission: “to invest in people with the values, ability and passion to change the world.”

The foundation is grounded in the belief that exceptional leaders, inspired by powerful ideas, are key to improving society and the lives of people around the world. Its areas of engagement are leadership development, nonprofit management, humanities, Jewish life, and urban engagement. They include:

In 1969, the School of Applied Social Sciences gathered more than 1,000 people to celebrate its 50th anniversary with a symposium “Social Theory and Social Invention: The Translation of Ideas and Knowledge into Action for the Welfare of Society.” One of the panel moderators was community leader Mort Mandel.

And so began Mandel’s long and impactful relationship with the school that saw the development of innovative degree and scholarship programs, new then renovated buildings, and a commitment to creating Change Agents with every new class of students and faculty members.

“Mort’s high standards of excellence always emboldened us to reach greater heights,” remembers Dean Gilmore. “The Mandel Foundation encouraged, challenged, and supported strategic priorities that were essential to our ongoing evolution as one of the nation’s premier schools of social work and nonprofit management.”

In 1984, the Mandel Foundation helped endow and found the Mandel Center for Nonprofit Organizations, a cooperative university venture between the School of Applied Social Sciences, the School of Law, and Weatherhead School of Management to offer advanced education for people who manage and govern human services, educational, arts, religious, and philanthropic organizations – one of the first ventures of its kind.

In 1988, the foundation served as the lead donor for the construction of a new school building and the renaming to Mandel School of Applied Social Sciences. In 2007, they helped fund and participated in a ribbon cutting for a new community studies center that bears their name and today houses two Mandel School research centers: The Center on Urban Poverty and Community Development and the Begun Center for Violence Prevention Research and Education.

In 2013, the Mandel School could count him as an alumnus; Mort Mandel was the first to earn the school’s new minor in social work when he received his undergraduate degree from Case Western Reserve, 74 years after putting his education on hold. That same year, the Mandel Foundation was the lead donor of the capital campaign for the building renovation, with a $4.95 million gift that was part of an $8 million award that also endowed the Dean’s chair and changed the name of the school to the Jack, Joseph and Morton Mandel School of Applied Social Sciences.

When addressing its impact on education, the Mandel Foundation website also gives special mention to the Mandel Leadership Fellows Program at the school. Outstanding students of social work receive full tuition scholarships to join a specialized track for future human services leaders. The course of study includes specialized seminars, fieldwork experience in clinical and community settings and individualized leadership mentoring – a personal passion for Mort and his brothers.

In 2015, the foundation helped support a conference center in the Health Education Campus (HEC) of Case Western Reserve University and Cleveland Clinic—as well as a wellness pathway for medical students. This summer it awarded the latest of several major gifts to the hospital, this one for an executive institute for future health care leaders, also located in the HEC.

In 2016, the Mandel Foundation made another meaningful gift to the school, in support of the Centennial celebration commemorating its 100th anniversary. True to his commitment to leadership development, Mort Mandel funded the project to record the history of the Mandel School, both commemoratively and academically. The illustrated book “100 Years of Inspiring Hope and Shaping the Future: The Jack, Joseph and Morton Mandel School of Applied Social Sciences”  was published in 2018. The academic history book is being written by nonprofit sector historian Elise C. Hagesfeld, PhD, MNO.

Mort Mandel is survived by his wife, Barbara, three children and several grandchildren. Jack Mandel, the eldest brother, died in 2011 at the age of 99. Joseph Mandel died in 2016 at 102. Mort Mandel’s memorial service is scheduled for 1 p.m. Sunday, October 20, at The Milton and Tamar Maltz Performing Arts Center at The Temple-Tifereth Israel. Visitation will immediately follow services until 5 p.m. at the Mandel School.

Portions of this In Memoriam originally appeared in The Daily on October 17, 2019.