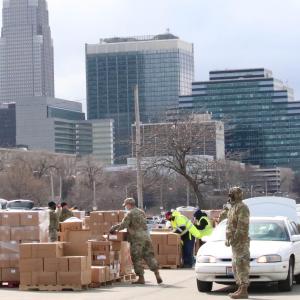 The News 5 Cleveland article "Food security is not just a COVID problem" - summarized below - discusses the problem of food insecurity in Cleveland and the efforts being taken by the Swetland Center and community leaders to address the results of this flawed system.

The foodNEST 2.0 study examined food system dynamics in Cleveland’s Buckeye-Shaker, Buckeye-Woodhill, and Central neighborhoods, which are historically redlined. This study, while led by CWRU researchers, was dependent on community leaders such as Michelle B. Jackson.

"We each brought our own activist piece to supporting this, but also perhaps nudging it in a direction that was a little more community-centric focused,” Jackson said. “I've always been super concerned about people having food…I can remember back in my youth it was, Oh, people in Africa are starving, you know, people in India are starving. [It] never occurred to me at that time that people in the United States are starving.”

Jackson, who lives in Ward 4, says it was important for the community’s voice to be heard and included in the rooms where solutions are being decided.

The findings include high reliance on emergency food assistance (7 in 10 Clevelanders in 2020; 5 in 10 in 2019) as well as Clevelanders receiving SNAP benefits consistently failing to consume key nutrients to help prevent chronic disease and support their immune systems.

“What this study really highlighted is how many opportunities there will be if we invest in efforts to really improve community empowerment and food systems work,” said Dr. Freedman. “It's targeting change at the system level that centers this goal of nutrition equity to hopefully improve economic opportunity, food security, and fair access to fresh and healthy foods in neighborhoods.”

Freedman says they hope to help create a city office dedicated to food and environmental justice. An interactive map of emergency food safety locations in Cleveland, including food pantries, hot meals, and community gardens, would also be key.