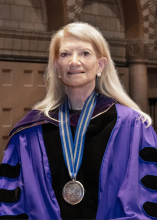 According to the World Health Organization (WHO) nurses and midwives represent more than 50% of the world’s healthcare workforce, providing a large majority of the care throughout the world. In the United States, for the past two decades, nurses have been rated the most trusted health professionals. Yet, challenges exist to advance the leadership roles of nurses, at the point of care to the board rooms of major health care organizations. Leadership within the nursing profession is key to the future of health care worldwide.

For almost 40 years, Dr. Fitzpatrick has shaped the leadership of the Frances Payne Bolton School of Nursing at Case Western Reserve University, and the leadership of the profession nationally and globally. She was first recruited to be Dean of the Bolton School in 1982, and was appointed as the Elizabeth Brooks Ford Professor of Nursing. She served for 15 years as Dean, and since 2018 has served as the Inaugural Director of the School’s Marian K. Shaughnessy Nurse Leadership Academy. She was a Fulbright Scholar at University College Cork, Cork, Ireland (2007-2008) and has received two honorary doctoral degrees.

As a global leader she founded and led the Bolton School WHO Collaborating Center for Nursing. She has provided consultation on nursing education and research throughout the world, including universities and health ministries in Africa, Asia, Australia, Europe, Latin America, and the Middle East. With the CWRU School of Medicine, she designed a series of educational interventions focused on HIV/AIDS prevention in Uganda. Additionally, providing local and national leadership for nursing, she drove the development of innovative academic programs, community initiatives, and clinical partnerships, including key partnerships for advanced nursing education with the top 3 hospitals in Cleveland, for nurse midwifery with the Frontier Nursing Service in Kentucky, and for nurse anesthesia with the Cleveland Clinic.

Dr. Fitzpatrick is widely published in nursing and health care literature with over 400 publications; she has written/edited more than 85 books, several with junior faculty who she has mentored. Over her career she has mentored hundreds of graduate students in nursing, and helped launch their careers in scholarship and leadership.

She served as director for a Nursing Care Quality Initiative, a multi-system, 10-hospital project focused on improving the care provided to hospitalized elders and their families that received a multi-million grant from the New York Health Alliance and the Brookdale Foundation.

With colleagues from the CWRU Schools of Law, Management, Medicine and Nursing, she is currently directing a national research project focused on identifying the effects of constraints (legislative and regulatory) on primary care Advanced Practice Registered Nurse (APRN) scope of practice as related to access to care, costs, and quality. Through her efforts as Dean of the Frances Payne Bolton School of Nursing, in the early 1990s legislation was enacted for three demonstration sites in Ohio granting title recognition and prescriptive authority to APRNs practicing in the sites. Dr. Fitzpatrick founded and led the CWRU site, the Buckeye Health Center, providing primary health care to underserved populations in Cleveland. The original legislation led to subsequent successful legislative initiatives on the state level. She also led the School in developing several APRN programs that have produced hundreds of graduates.

She has received numerous honors and awards; she was elected a Fellow in the American Academy of Nursing in 1981, Fellow in the National Academies of Practice in 1996, and an Honorary Fellow of the American Academy of Nurse Practitioners in 2018. She received the American Journal of Nursing Book of the Year Award 20 times; the Midwest Nursing Research Society Distinguished Contribution to Nursing Research Award; The Ohio State University Distinguished Alumna Award; Sigma Theta Tau International (STTI) Elizabeth McWilliams Miller Founders Award for Excellence in Nursing Research; and New York University Division of Nursing Distinguished Alumna Award. In 1993 she was selected as a participant for Leadership Cleveland. In 1994-95 she was a Distinguished Scholar at the Institute of Medicine and AAN and in 1995 was a Primary Care Fellow through the Bureau of Health Professions. Dr. Fitzpatrick received the ANF Distinguished Contribution to Nursing Science Award for sustained commitment and contributions to development of the discipline (2002). Other national awards have included: STTI Lucie Kelly Mentor Award (2003); STTI Founders Award for Leadership (2005); Midwest Nursing Research Society Lifetime Achievement Award (2010); and INANE Editors Award (2013). In 2014 Dr. Fitzpatrick was inducted into the STTI Research Hall of Fame Award. In 2016 she was named a Living Legend by AAN and in 2018 she received the prestigious ANA Jessie M. Scott award that recognizes leadership in demonstrating the interdependence between nursing education, practice and research. In June 2019 she was awarded the International Council of Nurses and Florence Nightingale Foundation International Achievement Award recognizing her contribution to advancing international nursing education through research, innovative conceptual models and theory development.