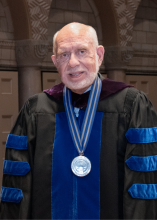 Dr. Goldstein is a socio-cultural anthropologist who has spent most of his career studying Tibetan society, culture, language and history in the twentieth century before Tibet become fully incorporated into the People’s Republic of China (PRC) in 1959, and then, how it has adapted after that. His research on Tibetan language has produced a 1195 page dictionary (“Tibetan-English Dictionary of Modern Tibetan”),  as well as an English-Tibetan Dictionary, a textbook on written Tibetan (“Essentials of Modern Literary Tibetan,”) and a spoken Tibetan primer (“Modern Spoken Tibetan: Lhasa Dialect”).

Dr. Goldstein has also written extensively on modern Tibetan history, including a definitive 4 volume, 2,655 page, history of modern Tibet from 1913-1959, all published by the U. of California Press between 1989 and 2019. Volume One (1989) of this Quartet, “The Demise of the Lamaist State,” was honored by an award from the Association of Asian Studies, which wrote of it: This monumental study is a path-breaking contribution to our understanding of modern Tibet. Melvyn Goldstein has marshalled an impressive array of documentary, archival and interview sources to provide critical new insights into the political and diplomatic history of Tibet during its independence of Chinese domination. Particularly important is the author’s use of Tibetan sources to go beyond the question of Tibet’s relation to China, and narrate in detail the conflicts within Tibetan society: between monastic and lay elements, between reformers and conservatives, between rival regents’ cliques. The Levinson Prize Committee of the China and Inner Asia Council is proud to give Honorable Mention to Professor Goldstein for this impressive contribution to the development of an important part of our field.

Professor Goldstein has also spent years investigating and explicating one of the world’s rarest forms of marriage and family - fraternal polyandry, i.e., marriage that involves 2, 3, 4, 5+ brothers sharing one wife. Fraternal polyandry is found most commonly in Tibet where it was/is highly preferred. Initially it was said to be a consequence of a shortage of females due to female infanticide, but Professor Goldstein demonstrated indisputably through fieldwork that there was in fact no shortage of women and that the manifest and latent functions of fraternal polyandry were adaptations to both the unique high altitude environment in Tibet and to its traditional feudal-like socio-political system. Fraternal polyandry, he showed, was in fact, a functional equivalent of primogeniture, the widely practiced inheritance system used in Europe and Britain. More recently, he has studied how fraternal polyandry has adapted to different patterns of modernization in China, Nepal and India.

Roughly 10,000 years ago, some hunting and gathering societies began to develop farming and pastoral subsistence procurement systems.  One of Goldstein’s major research interests has been the nature of pastoralism on the Tibetan Plateau, and how it has adapted to and thrived at extreme high altitudes and under different socio-political systems.  Goldstein (with another DUP, Dr. Cynthia M. Beall), began longitudinal fieldwork with nomads in Tibet at altitudes of 15-17,500 feet in 1985-86, and subsequently made repeated follow-up fieldwork stints, the last one being in 2012.  Goldstein and Beall also conducted comparative fieldwork among high altitude nomadic pastoralists in Mongolia. These nomad projects resulted in numerous journal articles and two books: “Nomads of Western Tibet: The Survival of a way of Life” (1990) and “The Changing World of Mongolia’s Nomads” (1994).

Dr. Goldstein also conducted extensive research on cross-cultural aging in Tibet and Nepal and was one of the founders (with DUP Beall and another Anthropology department colleague, Dr. Charlotte Ikels) of the now well established, peer-review Journal of Cross-Cultural Gerontology. He, Beall and Ikels, also served as co-editors for its first ten years.

Dr. Goldstein’s largest current project is TOHAP (the Tibet Oral History and Archive Project). Knowledge of the social and political history of Tibet during the second half of the Twentieth Century has been limited by the absence of the voices of everyday Tibetans and officials from the traditional Tibetan government. The Tibetan Oral History and Archive Project was undertaken by Professor Goldstein to collect and preserve these voices, and with it a record of the diversity of life as it was lived in Tibet in the traditional and socialist eras. TOHAP, consequently, was organized as a digital online web archive that is being housed in perpetuity at the Library of Congress.

This archive contains approximately 1,500 tapes of Tibetan interviews which comprise of about 1,900 hours of audio and about 37,000 pages of English transcripts (single-spaced). The audio can be listened to simultaneous with reading the English transcripts, and an online glossary has been made available to explain Tibetan terms that appear in the transcripts.

The interviews have been marked up in XML language and are being edited at the Anthropology Department’s Center for Research on Tibet by Dr. Goldstein, TOHAP’s editor, and graduate and undergraduate students. Dr. Goldstein is working closely with Library of Congress regarding the transfer and posting on line of the materials, of which, about 1/3 are now available on the website at the Library of Congress.