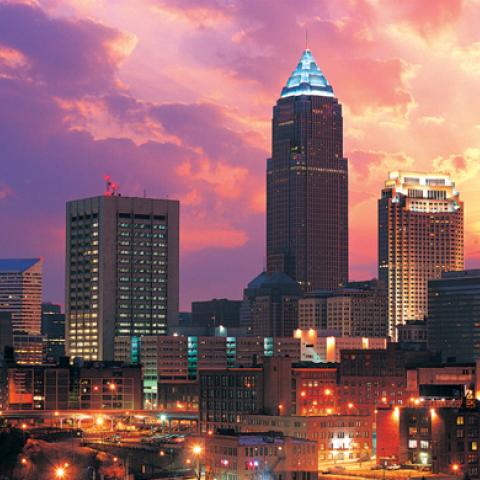 1. Cleveland was in fact the first city to be lit by electricity
Benjamin Franklin may have been the one to discover electricity, but Charles Brush of Cleveland is credited with illuminating Public Square in 1879. Side fact, the first electric traffic signal was placed at the intersection of Euclid Avenue and East 105th Street, which happens to be right next to our campus!

2. The first rock concert was held in Cleveland
Cleveland is considered the “Home of Rock and Roll.” Not only is Cleveland home to the Rock & Roll Hall of Fame, but in 1952, we made history by hosting the nation’s first rock concert, at the Cleveland Arena. The concert featured acts such as Paul Williams and the Hucklebuckers, and Tony Grimes and the Rockin’ Highlanders. Entrance fees were $1.50.

3. You may recognize some of these stars that started out in Cleveland
Many people you may recognize got their start or were born in the Cleveland area. Halle Berry, Drew Carey, Arsenio Hall and Margaret Hamilton (the Wicked Witch from Wizard of Oz) were all born in Cleveland. Comedian Bob Hope settled in Cleveland during his early career. Tom Hanks interned at Cleveland’s Great Lakes Shakespeare Festival as his first professional job. Some famous faces can still be found in Cleveland. You may see Bill Watterson (who created Calvin & Hobbes) at a local coffee shop today.

5. Cleveland is the birthplace of Superman
In 1933 Jerry Siegel and Joe Shuster created Superman while still in high school. Their earliest Superman prototype was based on a short story called “The Reign of The Superman,” in January 1933. The story featured a bald villain with telepathic powers, but they decided their character would be a force for good and recast him as a crime-fighting hero with super strength.