How CWRU led these grads to jobs with Disney production 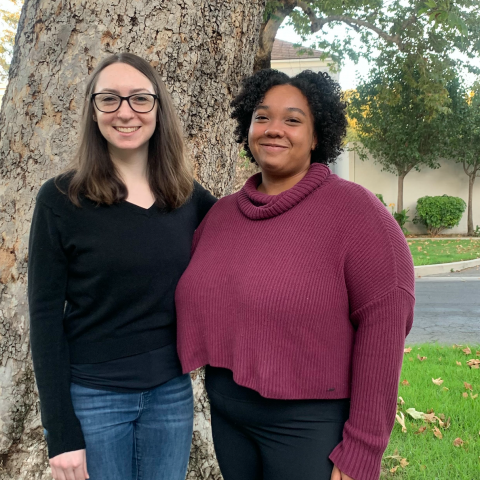 Beth Magid and Jahlyn Reyes-McKinley (both pictured here) are something of a real-life Mike Wazowski and James P. “Sulley” Sullivan. They’re friends from college. They’re roommates. And together they are working to bring laughter to children.

Both are production and animation professionals on the Disney+ animated show Monsters at Work. And as graduates of Case Western Reserve University’s Weatherhead School of Management (2017 and 2019, respectively), they say their CWRU experiences set them on the path to Monstropolis… er... Los Angeles.

Beth: Recalls a resume workshop during a class with professor John Paul Stephens that was critical to her success in building a resume that stood out when interviewing.

Jahlyn: Credits a “creativity in business” course taught by professor Richard Buchanan that helped her bridge the gap between design and management and eventually pushed her to pursue a career in animation.

Beth: “When I knew I wanted to start pursuing production, I scheduled a lot of informational interviews, which is a practice I learned at Weatherhead. Eventually, through making those connections with people, I ended up finding my way into this job at Monsters at Work.”

Jahlyn: Knowing she wanted to work in production, Jahlyn reconnected with Beth, who had graduated two years prior. It was Beth who provided a recommendation that led Jahlyn to Monsters at Work.

Beth: “I once thought my dream career path was silly and out of reach, but I found the right people, many from CWRU, who encouraged me to take the leap and chase it.”

Jahlyn: “Every teacher I had at Weatherhead always took the time to talk things through, to guide you, to shift you in a different direction. I always felt really supported at Weatherhead."

Sulley once said, “You don't need to study scaring. You just do it.” Business success is another story. It’s all about what you learn and who you learn from. That’s why business success starts at CWRU’s Weatherhead school.