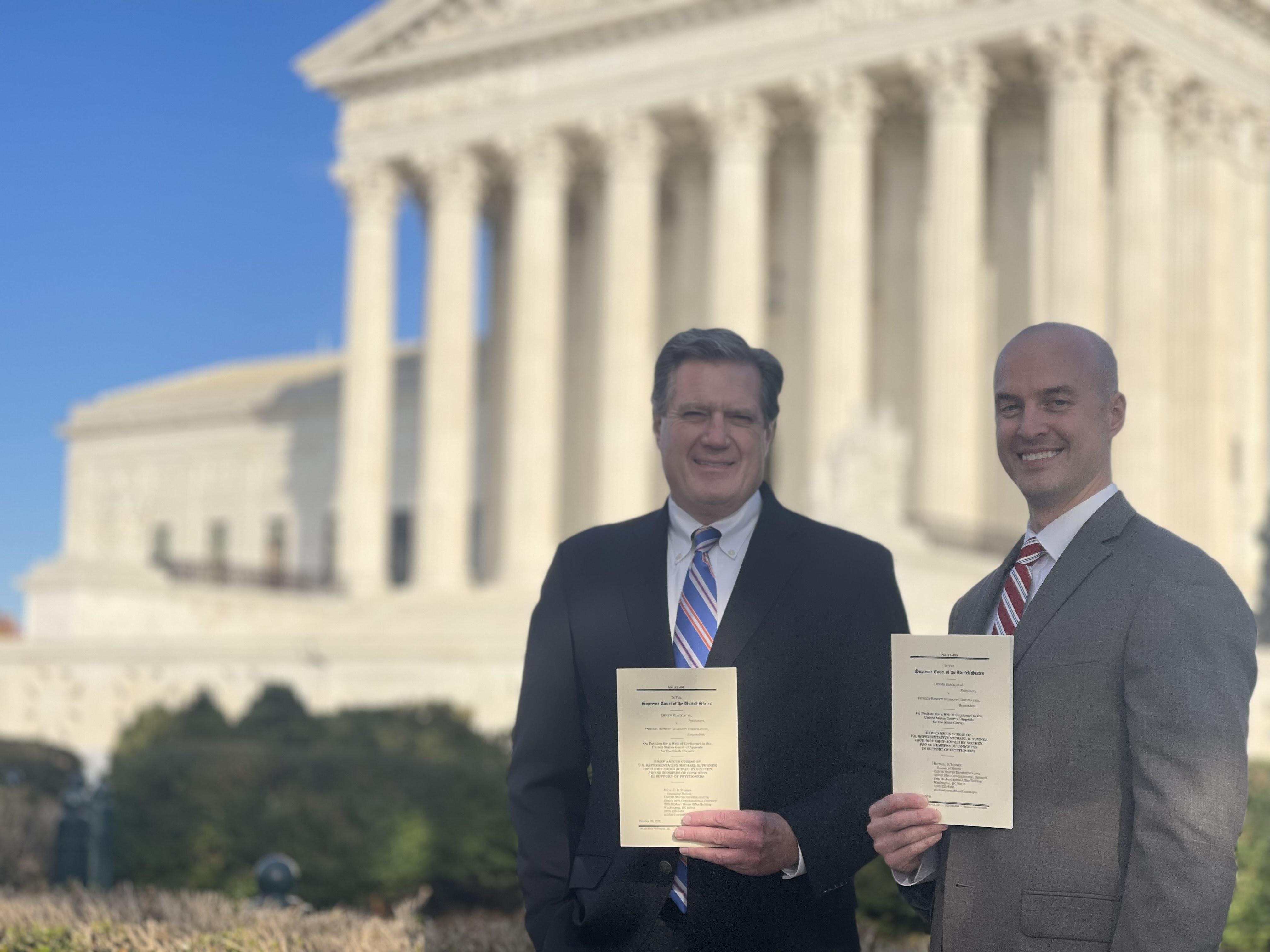 A year-long collaboration between U.S. Congressman Michael Turner (LAW ’85) and U.S. Marine Capt. Dylan Klossner (LAW ’15) has resulted in the filing of an amicus brief with the U.S. Supreme Court. The filing was made on behalf of a group of Delphi salaried retirees in Ohio who lost their pensions following the 2009 General Motors bankruptcy filing.

It’s unusual for an amicus brief to be prepared and filed by a legislative office. What makes the story even more compelling is that the collaborators are both alumni of Case Western Reserve University School of Law who graduated 30 years apart and share a passion for public service.

A lifelong resident of southwest Ohio and former mayor of Dayton, Ohio, Turner was elected to Congress in 2003 representing the 10th District. He currently serves as the ranking member of the House Armed Services Strategic Forces Subcommittee and the House Permanent Select Committee on Intelligence. Since 2009, Turner has been fighting for about 1,500 Delphi salaried retirees in their battle with the Pension Benefit Guaranty Corporation to secure the full value of their vested retirement benefits.

After 12 years of litigation, the Delphi retirees filed a petition for a writ of certiorari with the U.S. Supreme Court in 2021. They sent a request to Turner’s office—would it submit an amicus brief in support of their writ of certiorari? With Turner’s approval, Klossner, who is completing a U.S. Marine Corps Congressional Fellowship in Turner’s office,  agreed to take on the challenge.

“Dylan was not aware that usually congressional offices don’t prepare the amicus brief,” Turner said. “Frequently, congressional offices will help advocate but very unusually will we have the opportunity, as Dylan executed, to step up in a different court, the judicial Branch, and advocate for what we work on in the legislative branch.”

Over the course of several months and with Turner’s full support, Klossner prepared the brief, which Turner filed on Oct. 28, 2021.

“The fact that Dylan was willing to bring these skills to the table is what made the difference,” Turner said. “This was a very large project and when you consider all the other fellows assigned this year to Capitol Hill offices, none will have a project this big that they completed at the same time as completing the other obligations of the fellowship.”

The alumni earned the support of a bicameral, bipartisan group of 16 other members of Congress for the amicus brief. The U.S. Supreme Court could decide as early as January 2022 whether to take the case.

Something else resulted from this unique alumni collaboration. Klossner, like Turner, has been admitted to the U.S. Supreme Court. Turner was his nominator.

Klossner first reported for duty as a Judge Advocate in the Marine Corps after receiving his law degree from Case Western Reserve. He was initially stationed at Camp Pendleton, California—one of the largest and busiest military installations. While there, he prosecuted felony-level, complex courts-martial involving arson, sexual assault, drug trafficking and theft.

After completing 11 contested trials, Klossner deployed to Iraq as the Staff Judge Advocate for a small group of Marines tasked with advising and assisting an Iraqi counterpart with their fight against ISIS. Upon his return from Iraq, he was selected for the fellowship program and assigned to Turner’s office.

“I knew that Congressman Turner looks for lawyers from either the Marines or Navy because he knows they can be of great service to his office,” Klossner said. “When I saw he went to Case Western Reserve, I moved my CWRU degree to the first line of my bio to improve my chances of working in his office. I’m happy that I was chosen.”

The fellowship gave Klossner the opportunity to learn first-hand how Congress works.

As Turner explained, “With the fellowship, you join my congressional office, so even though you are still in the military, you are on my staff. You get to work on legal matters and legislation and get an overall sense of how Congress works.”

“It’s a good way for the military to make sure it’s being the best version of itself,” added Klossner. “By embedding officers in various congressional offices, it makes the connection between the legislative branch and the Department of Defense stronger so it can be more effective overall.”

Turner and Klossner both credit their academic experiences at Case Western Reserve for success in their respective legal careers. Looking back at their School of Law education, they share an appreciation for criminal law classes with Lewis Katz, the John C. Hutchins Professor Emeritus of Law. Klossner also said he is thankful for his experiences on the Jonathan M. Ault Mock Trial team and noted his appreciation for several faculty members including Professors Michael Benza, Cassandra Burke Robertson, David Carney and Jonathan Entin. He also enjoyed tax law with Professor Leon Gabinet, who passed away on Dec. 6.

The views in this article do not necessarily represent the views of the Department of Defense, Department of the Navy or the U.S. Marine Corps.