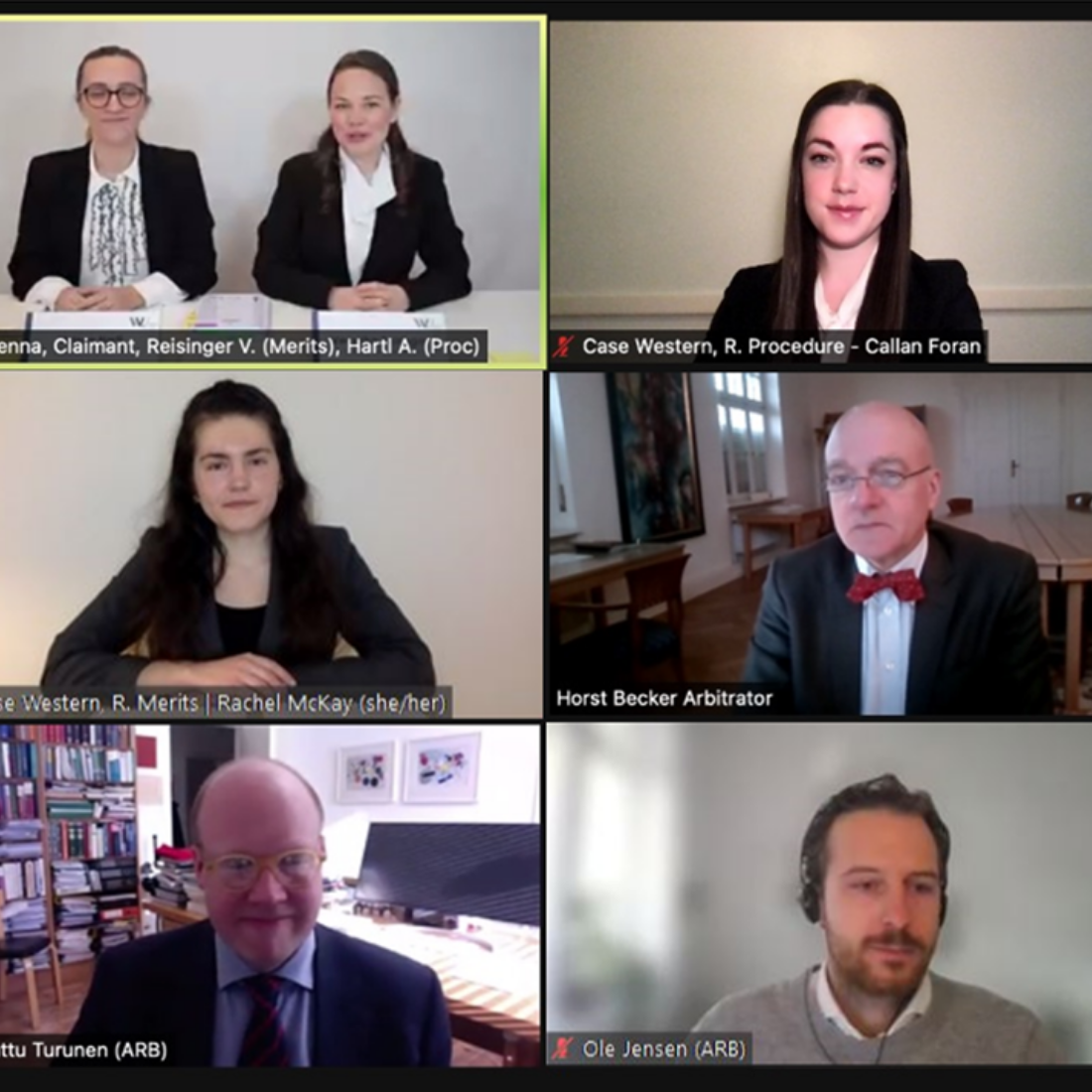 The Vis International Arbitration Moot Court Team at Case Western Reserve School of Law has just completed a history making season, after competing at the 29th Vis International Arbitration Moot Court competition held virtually this past week. For the first time in the law school’s history, the Vis Moot Court Team advanced to the elimination rounds of the competition. To put this in perspective, over 350 teams from around the world entered the Vis competition and only the top 64 teams advanced to the knockout rounds. Only five other American teams advanced, including the University of Michigan and Harvard University.

The CWRU team made it to the elimination rounds thanks to the strong performances of students Rachel McKay, Callan Foran, John Schon, Reece Disney and Frankie Collins. Represented by co-captains McKay and Foran in the round of 64, the CWRU team was defeated by the home team, Vienna University of Economics and Business, by the slimmest of margins. Cheering from the sidelines were the remaining team members, Elena Strelkova, Brooke Behrmann, and Rose Carlyon along with coaches Douglas Pilawa (LAW ‘19), adjunct professor and associate attorney at Squire Patton Boggs; and Professor Katy Mercer.

McKay received “Honorable Mention for Best Oralist”—an award given to approximately 25 students out of 2,500. This is the second year in a row that a CWRU student has taken home a top speaking award at this prestigious competition. Last year, Foran took home the same award, becoming only the second person in CWRU’s history to win it.

Throughout the year, the Vis team has participated in pre-moots hosted (virtually) in Sri Lanka, Hungary, India and Greece.

Established in 1994, the Willem C. Vis Moot competition is the largest arbitration moot competition in the world and the second-largest moot overall, crafting problems involving some of the most contentious topics in international business law.

This year's problem involved a contract formation dispute, challenging students to unravel the choice of law web and argue for proper application of the United Nations Convention on Contracts for the International Sale of Goods, the UNCITRAL Model Law and the Asian International Arbitration Centre Rules of Arbitration. The team prepared briefs comprehensively addressing the positions of both Claimant and Respondent, digging into scholarly commentary, case law, and arbitral practice. The team's strong knowledge of the law was persuasively displayed both in its written submissions and in the rigorous oral arguments.