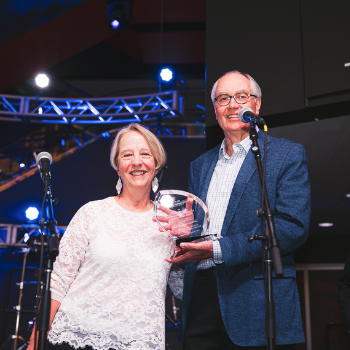 As he retires as president of the George Gund Foundation at the end of the year, David Abbott will step into a new role in 2022 as the inaugural Distinguished Jurist in Residence at the Case Western Reserve University School of Law.

Law school Co-Deans Jessica Berg and Michael Scharf announced the new post when they presented Abbott and his wife, Jan Roller, with the school’s annual Humanitarian Award at the Rock and Roll Hall of Fame and Museum. The event on Sept. 24 marked the university’s 30th anniversary of the Frederick K. Cox International Law Center.

With its Gund Foundation endowment, the Cox Center has emerged as a nationally ranked institution, whose work has been cited by international courts and nominated for a Nobel Peace Prize by an international prosecutor.

“The Cox Center was endowed with a gift from the Gund Foundation in 1991, so it’s fitting that we select the foundation’s former president—as well as an incredibly active member in our community—as our first Distinguished Jurist in Residence,” Berg said.

“Having David join the School of Law is a perfect fit,” Scharf said. “Our objective in establishing the Distinguished Jurist in Residence initiative is to bring a recently retired executive, judge or government official to campus each year to enrich student learning, aid in faculty development, advise the deans and engage with alumni.”

As part of the new role at the law school, Abbott will serve as a special advisor to the deans. He also will be invited to join faculty on the platform at the law school’s commencement, lead a group discussion in his areas of expertise, followed by dinner with select faculty and students; he’ll also be assigned an office in the law school to be accessible to students.

“It is a tremendous honor to join the School of Law in this capacity as its first Distinguished Jurist in Residence,” Abbott said. “Throughout my career, I’ve worked to make Cleveland, and our country, a better place to live. I look forward to continuing that work in this new role.”