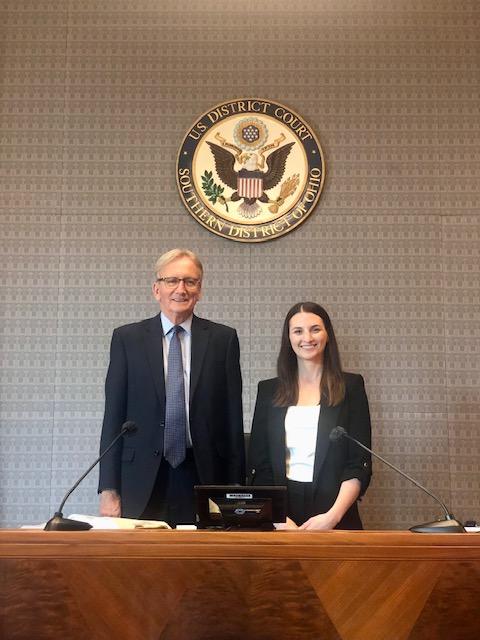 For nearly thirty years, Case Western Reserve University School of Law’s Federal Judicial Externship program has provided the opportunity for hundreds of students to extern with federal judges in the summer after their first year of law school. The program is one of the many legacies that the late Peter Gerhart, a longtime professor and former dean, left at the school. He conceived of the idea as a way for rising second-year students to enhance their legal education by learning from practice, and it continues to be a highlight of the law school’s top-ranked experiential education curriculum.

When Judge Karen Nelson Moore of the Sixth Circuit Court of Appeals was a professor at the law school, she was the first to lead the program. She discussed the concept with the judges in the Northern District of Ohio, many of whom agreed to host externs and continue to do so today. Judge Moore is still connected to the program as well; she has hosted an extern nearly every summer since joining the Sixth Circuit. Today, the program has expanded beyond the local court—students now extern with federal courts in states across the country.

Serving as an extern is an invaluable experience for students because they learn about the litigation process from the court’s perspective—something that few attorneys have the chance to do. Students also hone their research, analysis and writing skills while being exposed to many different procedural and substantive legal issues.

According to Bill Leatherberry, who ran the program for many years, “I discovered very early on that students really wanted the opportunities and valued the experience they got. They observed good lawyering and poor lawyering. They heard from the judges and their clerks about what impressed and what irritated them. They also heard a lot about the importance of high-quality legal writing.”

The program has also been a way for the law school to showcase its talented students to federal judges. Professor Jennifer Cupar, who currently leads the program, states, “Each year, the feedback we receive from the judges is that our students are well prepared, bright, enthusiastic, and an asset in chambers.”

Judge Edmund Sargus (’78) of the Southern District of Ohio agrees: “For a number of years, I have worked with externs from the law school. All of us in chambers look forward to the talented students selected by the school joining us for the summer. We enjoyed one recent extern, Grace Saalman, so much that a year later I offered her a position as a clerk.”

Grace is not the only student in recent years to have turned an externship into a clerkship after graduation. The following students all received clerkships with the federal judges for whom they externed during law school: Sabrina Morris (LAW ‘19) (Magistrate Judge Limbert, NDOH); Vito Giannola (LAW ‘20) (Judge Batchelder, Sixth Circuit); Dillon Brown (LAW ‘21) (Magistrate Judge Vermaat, W.D. Mich.); Kennedy Dickson (Class of 2023) (Judge Calabrese, NDOH); and Matt Borcas (Class of 2023) (Judge Oliver, NDOH).

Many other externs, having seen the extraordinary value of working closely with a judge, have also gone on to serve as law clerks after they graduate.