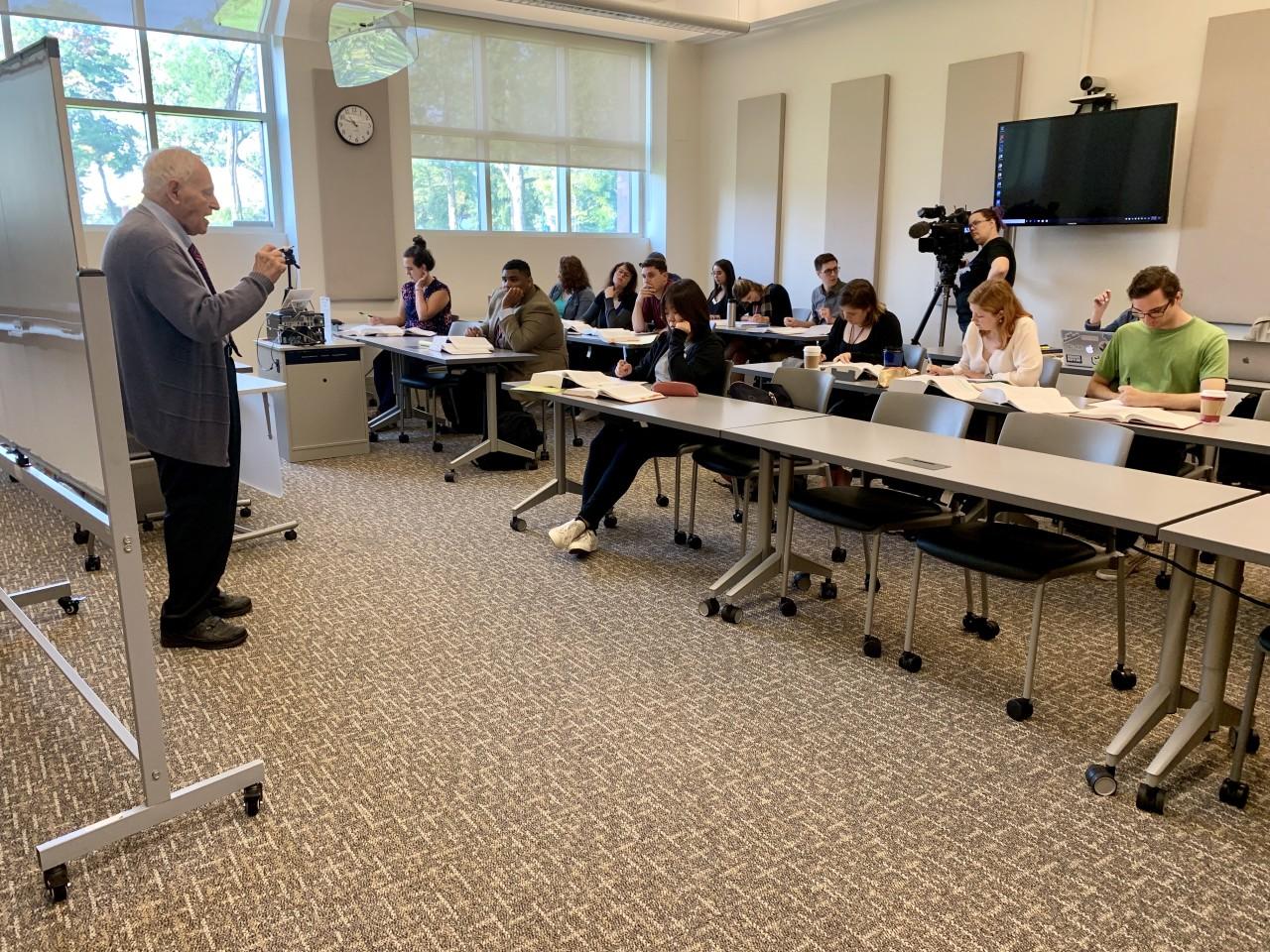 Leon Gabinet, longtime tax law professor at the Case Western Reserve University School of Law, passed away on Dec. 6, 2021, at age 94. He is survived by his children Sarah (LAW '82), Katie and Ari, as well as many grandchildren and great-grandchildren.

At an early age, Leon moved with his family to the United States from Poland. During World War II, Leon enlisted in the U.S. Navy at age 17, where he served as a fire controlman on the USS Flint. The ship was hit by a kamikaze aircraft off Okinawa and heavily damaged, with significant casualties. Leon heroically survived hours in the fiery water, strafed by Japanese aircraft.

While at the University of Chicago, Leon took time off to help European Jewish refugees who survived World War II get into what is now Israel in defiance of the British blockade. On rickety old vessels, Leon and a small group of Jewish U.S. Navy veterans transported hundreds of Jewish refugees who would become founders of the Jewish State. His rusty ship was captured by the United Kingdom and he was interned by the British on Cyprus for a short period of time. When he was exchanged for captured British soldiers, he returned to the University of Chicago to complete his law studies.

After law school, Leon clerked for a justice on the Oregon Supreme Court, worked for several years on the Oregon Tax Commission, and practiced law for a dozen years at a prestigious Portland law firm. From 1968 to 2021, Leon taught at Case Western Reserve University School of Law, where he published numerous important books and articles in the area of tax law. He taught thousands of students, many of whom have gone on to success as tax attorneys in the country’s major law firms and consulting firms as well as the Internal Revenue Service (IRS).

His former student, Don Korb, who would go on to be chief counsel of the IRS, said, “As I look back on my career, it is very clear to me that Leon Gabinet is certainly one of those very few people in my life who ‘made’ me what I am today.” He further recalled, “[W]e benefited immensely not only from Leon’s vast knowledge of and experience with the tax code but also from his dry sense of humor and quite witty observations on the life of a law student in general and the vagaries of the tax law in particular.”

Known for his kindness and wit, Leon has been among the most beloved members of the faculty at the law school, admired by students, staff and faculty colleagues. “Leon was not only a brilliant colleague and mentor but also a deeply affectionate friend,” said Sharona Hoffman, the Edgar A. Hahn Professor of Law.

When the School of Law's dean was appointed president of the university in 1970, Leon served for a year as the interim dean while continuing to teach a full load of courses.  He later served as executive director of the law school’s Graduate Program in Taxation and as a member of the prestigious American Law Institute.  In 2010, one of his former students, Coleman P. Burke, celebrated Leon’s 42nd year of teaching by endowing a chair in Leon’s honor, with Leon as the first occupant.

When Leon retired from the law school in May 2014, the Case Western Reserve Law Review published a tribute issue in his honor. His retirement was short-lived, however. He returned the following fall to teach a course he had never before taught, insurance law.  Retirement or not, Leon continued to show up at the law school bright and early every weekday, and some weekend days. He taught tax law through the pandemic, learning how to teach over Zoom in his 90s. His last class was in the fall of 2021.

In 2019, ABC News 5 Cleveland profiled him as possibly the nation’s oldest teaching law professor. For hundreds of students like Chris Lauer, Leon’s tax law course was a “must-do” at the law school. “It’s like your grandfather explaining something to you—I think it resonates differently hearing it from someone who’s had so much experience, who’s seen so many changes in the tax code over his life,” Lauer told ABC News.

His colleague and closest friend, Lewis Katz, the John C. Hutchins Professor Emeritus of Law, says Leon “succeeded in an almost impossible task: He made tax law accessible.” Thanks to Leon, “over 50 years’ worth of CWRU law students have graduated with a competency in tax law that is probably unequalled at any other law school.”

“You would think going into a federal income tax class that it was going to be really dry and boring,” said law student Jessica Ice in a 2019 interview with ABC News. “But I laugh every class. I just have a great time.”

“Right until the end, Leon continued to be a devoted teacher, focused on the interests of his students.His energy and enthusiasm never waned and he was in his office almost every day,” said Co-Dean Jessica Berg.

“Leon’s joy of life was matched only by his love for teaching. He somehow found a way to make learning tax law exciting and fun for each generation of new students,” added Co-Dean Michael Scharf.

As his colleague Professor Jensen, sums it up, “It’s hard to imagine the law school without him.”

Funeral services will be held at Berkowitz-Kumin-Bookatz Memorial Chapel on Friday, Dec. 10 at 11:00 a.m. The service will be livestreamed on the internet. Interment will take place at Bet Olam Cemetery. The family has requested a private Shiva. More information can be found online.