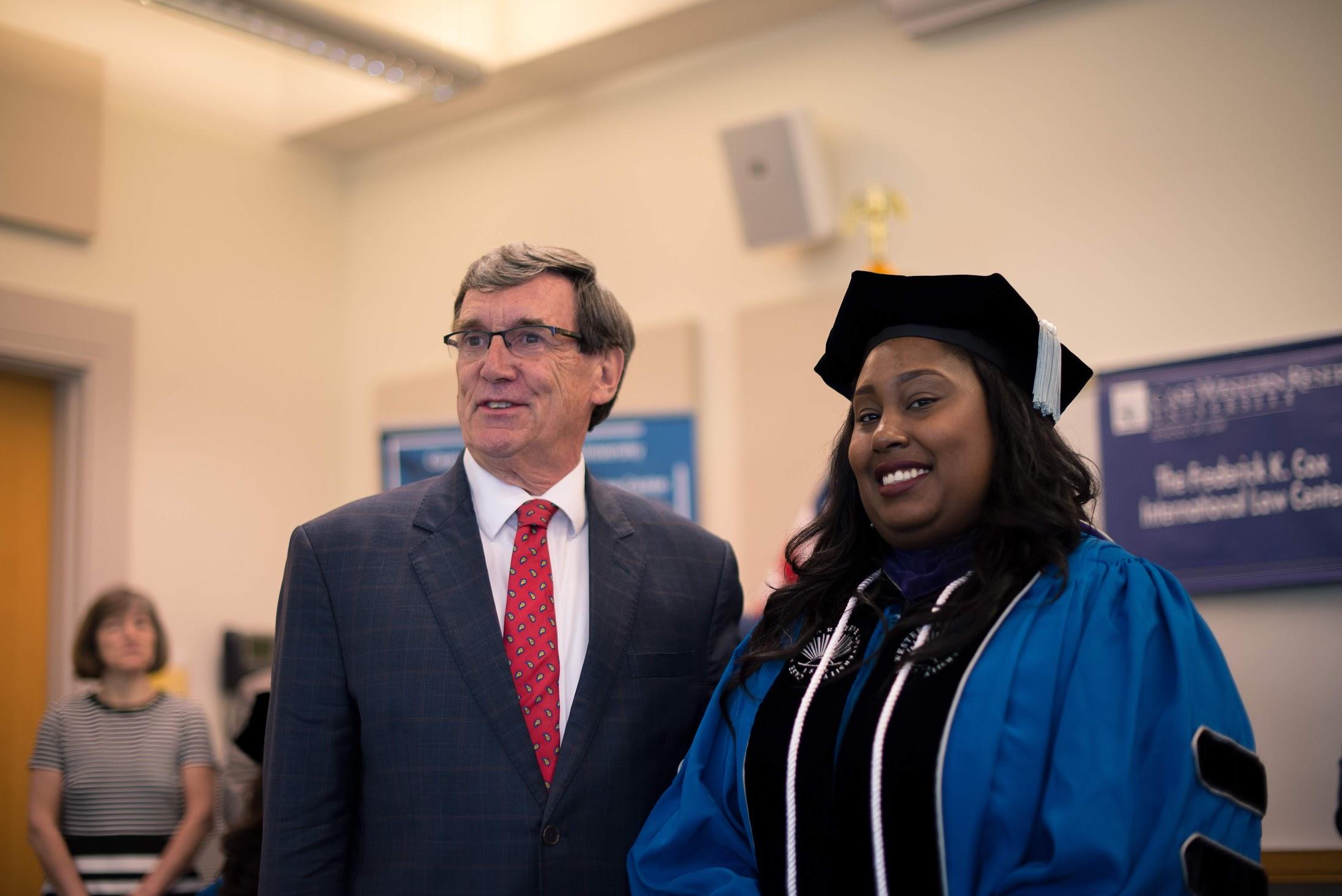 Peter Gerhart, longtime professor and former dean of the Case Western Reserve University School of Law, passed away on February 7, 2021, after suffering a brain hemorrhage. He is survived by his wife Ann, his children and grandchildren.

His daughters Gracie and Mary are active members of the Case Western Reserve community— Gracie is currently a third-year student at the law school and Mary works in research administration.

“Peter was a phenomenal colleague, whose warmth and wisdom were shared widely throughout our faculty,” said law school Co-Dean Jessica Berg. “We will miss him for his many contributions to our school, but even more, for his smile.”

Gerhart was the John Homer Kapp Professor of Law and held a secondary appointment at the Weatherhead School of Management. He received his BA from Northwestern University in 1967 and his JD from Columbia University Law School in 1971. He began his career as an associate at the law firm of Weil Gotshal & Manges in New York City before teaching for 11 years and serving as associate dean and interim dean at Ohio State University College of Law.

After a national search, Gerhart joined the Case Western Reserve law school faculty as dean in 1986. He served in that capacity for ten years, until 1996. During his decanal tenure, he played a key role in developing the Frederick K. Cox International Law Center and the Milton A. Kramer Law Clinic. A talented and experienced higher education administrator, he served as the interim president of Lake Erie College from 2015 to 2016.

Gerhart was a noted expert in antitrust and trade regulation and a specialist in international economic law and globalization. He published dozens of law review articles in leading law journals at Duke University School of Law, Vanderbilt University Law School and the University of Pennsylvania Carey Law School, among others.

Each book followed the novel approach he developed regarding legal reasoning, making the case that the doctrinal categories used to understand private law have only artificial boundaries.

“He had a lot more to say but left us with so much to cherish and learn from,” said Professor Wendy Wagner, University of Texas School of Law, noting that the trilogy of Cambridge monographs stand as a memorial to Professor Gerhart’s scholarship and life’s work.

While service and scholarship played a crucial role in Gerhart’s career, his passion for teaching, especially first-year law students, stands out as one of his defining characteristics. By his own choice, he taught four different courses in the law school’s first-year curriculum, including torts, contracts and property legislation and regulation—sometimes covering two of them in the same year. Moved by the recent spate of incidents of racial injustice, he devoted part of his fall 2020 sabbatical to designing a course in structural racism and the law.

Professor Gerhart truly loved teaching and freely gave much of his time and energy to his students. “Peter taught his students with joy and passion,” said Professor Juliet Kostritsky. “They revered his brilliance but also his kindness.”

“As our law school offices adjoined, I got to know Peter as a person who was passionate about his students and their development,” said Katharine Van Tassel, visiting professor of law, noting that he spent hours with his students, giving them the benefits of his caring kindness, insights, and sense of humor. “As one of many who were fortunate enough to work with Peter, I will not forget his always wise counsel, sharp insights and infectious collegiality.”

“He was never shy to crack a joke or make a witty remark,” said recent graduate Harrison Quest. “We shared a banter that I will always cherish.”

Gerhart’s impact will long outlast him.

A Zoom celebration of Professor Gerhart’s works and life will be announced for later in the semester.

Condolences may be sent to: