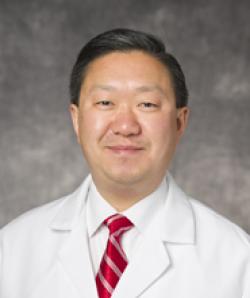 Dr. Rhee is a leading educator of ophthalmologists. He serves on various scientific or curriculum committees for the American Academy of Ophthalmology, National Institutes of Health, American Glaucoma Society, American Society of Cataract and Refractive Surgeons, and American Board of Ophthalmology (the certifying organization for ophthalmologists). Dr. Rhee has served as an examiner for the American Board of Ophthalmology since 2006 and served one year in 2007 as a special examiner. In 2007, his contributions to the American Academy of Ophthalmology were recognized by the Achievement Award and in 2013 by the Senior Achievement Award; he was again recognized for the American Academy of Ophthalmology for distinguished educational contributions to the field by the Secretariat Award in 2014. Dr. Rhee has organized and developed the curricula for numerous regional and national meetings for the continuing education of his colleague ophthalmologists. In 2013, Dr. Rhee was named the chair of the Glaucoma Curriculum Committee for the American Society of Cataract and Refractive Surgery which oversees the glaucoma content for all ASCRS activities. Dr. Rhee participates in the teaching of glaucoma to medical students, residents and fellows. He has been an invited speaker to over 270 meetings regionally, nationally and internationally. Dr. Rhee is an accomplished writer having co-authored the Wills Eye Drug Guide (first edition 1998, second edition 2001) and was the lead editor for the third edition of the Wills Eye Manual (2001). He authored the Ophthalmic Drug Guide (first edition 2007, second edition 2010). Dr. Rhee authored and edited Color Atlas & Synopsis of Clinical Ophthalmology: Glaucoma (first edition 2003, second edition 2012, third edition 2017). His has served as a co-editor of the Shields’ Textbook of Glaucoma (6th ed, 2011). Additionally, he contributed over 30 chapters to other textbooks whose target audience ranged from the general public, general medicine, comprehensive ophthalmologists and glaucoma specialists. Dr. Rhee began as a consultant for the Physician’s Desk Reference for Ophthalmology in 1997 and had been the lead medical editor for that publication from 2002 - 2012. He reviews for several ophthalmologic journals, and in 2006, Dr. Rhee began serving as a contributing editor for the trade publication Ocular Surgery News, served as an editor for the journal Lasers in Medicine from 2009-2015, and International Glaucoma Review from 2011-2014.

Dr. Rhee has participated in the training of over 150 residents, 40 clinical fellows, as well as mentored 4 post-doctoral research fellows, 15 medical and 9 undergraduate students in the lab. His fellowship trainees have gone onto leadership positions to include a department chair and residency program directors. Approximately half of his clinical fellowship and laboratory trainees are faculty in numerous ophthalmology departments nationally and internationally. Dr. Rhee inaugurated the first glaucoma fellowship at University Hospitals in 2016.

In addition to his main interest of caring for patients, Dr. Rhee’s scientific research is aimed at determining the cellular and molecular causes of glaucoma while developing disease modifying as a novel treatment approach. His laboratory investigates the molecular mechanisms of extracellular matrix (ECM) regulation as it pertains to the health and disease of the drains of the eye i.e. trabecular meshwork (TM) and ciliary body. They first gained recognition in the mid-2000s by settling a long-standing debate on the mechanism of action of the most commonly prescribed medication class for the treatment of glaucoma – prostaglandin analogues (PGAs). One group felt that PGAs worked exclusively through the accessory drain of the eye, the ciliary body, while another group believed that PGAs had a significant effect on TM drainage as well. Dr. Rhee’s group found that PGAs effect both tissues and found that the balance of matrix metalloproteinases (MMPs) and their kinetic inhibitors, tissue inhibitors of metalloproteinases (TIMPs), correlates to IOP lowering potency with PGAs. He was also able to explain that both groups were correct, and the differences they were observing were primarily an artifact of the model systems they were using. Their studies expanded to examine the synthesis/deposition aspect of ECM homeostasis.

It had been long believed that ECM homeostasis in the drains of the eye are critical to the normal physiology and that dysregulation is the only known primary pathophysiology of primary open-angle glaucoma. However, the molecular controls of ECM homeostasis in the TM have remained elusive. Dr. Rhee believes that proteins that control ECM in other tissues would have a regulatory effect on ECM and hence, IOP, in the TM. His group was first to define the expression pattern, intracellular, and ultrastructural localization of SPARC, considered the prototypical matricellular protein, within the TM. We were also first to demonstrate that SPARC-null mice have a lower IOP than their corresponding wild-type mice due to enhanced aqueous outflow. Additionally, they demonstrated that SPARC overexpression increases IOP in perfused cadaveric human anterior segments corresponding to a qualitative change to the ECM of the juxtacanalicular TM. Furthermore, the cytokine transforming growth factor beta-2, which is heavily implicated in POAG, is unable to elevate the IOP in SPARC -/- mice. These findings strongly implicate SPARC as a pivotal regulatory node in ECM synthesis / accumulation. His lab is credited as having elucidated this key regulatory protein for outflow drainage and IOP control; to date, less than 10 proteins have achieved this level of recognition.

His work continues with SPARC with the hopes of developing new treatment for glaucoma. However, their work to reveal a previously unknown mechanism of SPARC, and potentially matricellular proteins as a class, are potentially generalizable to the numerous pro-fibrotic systemic diseases in which SPARC has been implicated e.g. hepatic fibrosis, renal nephrosis, scleroderma, etc. His research been supported the National Institutes of Health as well as several foundation (e.g. the American Glaucoma Society, Research to Prevent Blindness, Lions Research Fund) and industry grants.

Because of Dr. Rhee’s scientific achievement, leadership and vision, he was selected to serve on the very select and prestigious National Eye Advisory Council of the National Eye Institute, National Institutes of Health (2015-2019) which assists, consults, and advises the NEI Director on matters related to activities carried out by and through the Institute.

Because of both his clinical and scientific background, Dr. Rhee is often asked to consult for numerous pharmaceutical and device manufacturers for activities ranging from collaborative research to clarify pharmacologic mechanisms of action to educating the physicians who will eventually train other ophthalmologists on novel technologies and pharmaceuticals.

Dr. Rhee has a long history of administrative leadership. While at Wills Eye Hospital, he served as the Medical Director of the Glaucoma Service Diagnostic Laboratory from 2004 through late 2005. In early 2007, Dr. Rhee began service as the Medical Director of the Mass Eye and Ear suburban centers in Stoneham and East Bridgewater, Mass. In 2008, Dr. Rhee’s duties expanded to serve as medical director of strategic network development. In 2010, his responsibilities at Mass Eye & Ear expanded to become the associate chief of practice development and finally in 2011 to associate chief of operations and practice development. In addition to serving as director of the University Hospitals Eye Institute and chairman of the Case Western Reserve University Department of Ophthalmology and Visual Sciences, Dr. Rhee chaired the UH Medical Group Access Committee which has span over patient access across the entire University Hospitals health care system and now chairs the UH Medical Group Finance Committee.

Dr. Rhee has served to advocate for patient safety issues at the legislative level. Dr. Rhee served as vice president of the Massachusetts Society of Eye Physicians and Surgeons from 2009-2013 having testified before the Massachusetts House of Representatives. Aside from numerous citations in ophthalmology trade journals, Dr. Rhee has been interviewed for local newspapers, radio programs and the Wall Street Journal.

Dr. Rhee cares for both adult and childhood glaucomas. He has an interest in complex and high-risk cases, rare clinical syndromes, as well as the more common forms of glaucoma. Some of Dr. Rhee’s clinical research interests include the outcomes of both traditional and novel/advanced surgical procedures. Dr. Rhee is often credited as being one of the few early pioneers that ushered in a new era of the surgical management of glaucoma – what has now become known as minimally invasive glaucoma surgeries (MIGS). He was one of the first five surgeons in the world to perform the Trabectome procedure, which would later become recognized as the first MIGS procedure. He developed technique aspects for the procedure and his clinical outcomes research helped determine Trabectome’s place in our surgical armamentarium. Dr. Rhee is regarded as a key opinion leader in the surgical space and has often been first to bring new commercial technologies to the region or new investigational devices allowing early access to these technologies as part of FDA approved study protocols – e.g. first to perform Trabectome in New England and Northeast Ohio, first to implant commercially available iStent in New England, first to implant commercially available CyPass in Northeast Ohio, first to implant Hydrus device in Northeast Ohio (first as part of an FDA trial, later commercially available), first Glaukos G3 Supra in Northeast Ohio (FDA trial). Dr. Rhee has numerous publications evaluating these and other surgical techniques and technologies that impact for clinical practice.

Dr. Rhee is one of the few surgeons in the Midwest who also offers deep sclerectomy, an alternative to traditional glaucoma filtration surgery trabeculectomy. With the resources of the glaucoma service of UH Cleveland Medical Center, Dr. Rhee can offer the widest array of surgical procedures and implant devices available in the Midwest. Dr. Rhee has been included in the prestigious Best Doctors (Boston) since 2007 and has been recognized by Boston magazine as one of its “Best Doctors 2007-2008,” as well as Cleveland magazine since 2015.