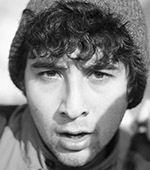 Research interests: I'm currently working on developing nanoparticle based composites that will be used for the detection and treatment of hard-to-reach cancers such metastatic breast cancers and brain tumors. Myself and other lab members are developing and testing a nanoparticle agent called a nanochain. This nanochain is a high aspect-to-ratio nanoparticle that has the ability to target a tumor of interest via highly site specific active targeting of the tumor's associated endothelium. This particle, composed of iron, is multifunctional and can target brain tumors and metastatic breast cancers with the appropriate targeting ligands; and since it is composed of iron we are able to enhance tumor contrast using MR imaging which will allow us to capture the portions of the tumor that are missed by conventional MR imaging. 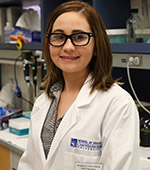 Undergrad degree and major: BS in Microbiology from University of Puerto Rico-Humacao 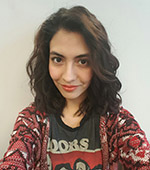 Research interests: I am currently pursuing a PhD degree in chemistry with Dr. Clemens Burda. My current project involves the development of nanoparticles for diagnosis and treatment of diseases through photodynamic therapy. I'm interested in developing innovative approaches to treat cancers through the use of less toxic procedures. As such I am now working, in collaboration with clinical and pre-clinical researchers at Case Medical School, on the synthesis of gold nanoparticles to target tumor sites. Other research interests include characterizing energy transfer by various molecular spectroscopy techniques. 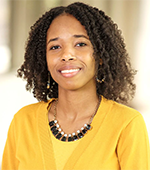 Undergrad degree and major: BS in Biology with minors in Chemistry and Africana Studies from Indiana University Purdue University IndianapolisResearch interests: I am currently rotating in Michelle Longworth's lab in the Department of Cellular and Molecular Medicine at the Cleveland Clinic Lerner Research Institute (LRI). We are attempting to elucidate the role of the Condensin II in regulating cell fate decision in Drosophlia. We are particularly interested in the Condensin II subunit CAP-D3 and its possible role in microcephaly. An additional rotation project involves characterizing intestinal organoid cultures or enteroids in efforts to improve applicability for disease modeling. 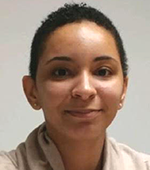 Undergrad degree and major: BA from University of Pittsburgh

My research interests are at the interface of bioengineering and cancer cell biology. Focusing on molecular and cellular mechanisms, tissue engineering methods will be utilized to investigate and inform the development of novel therapeutic techniques and regenerative medicine approaches for brain cancer. 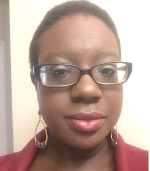 I am interested in cancer biology, specifically in how oncogenes play a significant role in chemotherapy resistance. As well, I intend to study the effect of chemotherapy drugs on leukemic and breast cancer patients and understand the mechanisms that govern metastatic development of cancer cells. 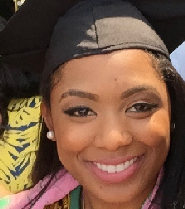 My research interest includes cancer biochemistry. With a focus on the development of new cancer approaches that will avoid damaging normal cells while stopping the proliferation of abnormal cancer cells. In doing so I will be working with Dr. Michael Kalafatis (Department of Chemistry, The Center for Gene Regulation in Health and Disease, CSU) exploring the apoptotic pathway and testing new drugs that trigger apoptosis in the intrinsic and extrinsic pathway. 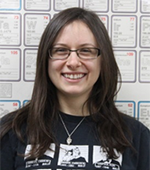 Undergrad degree and major: BS in Biology with a minor in Chemistry from Youngstown State University

Research interests: I work in the Bone Mechanics and Mechanobiology lab with Dr. Marnie Saunders in the Biomedical Engineering Department. My research interests include developing a point-of-care device for quantifying bone loss using urine. My interest is preventative science and this tool acts as a pre-diagnostic tool for those concerned with monitoring bone health. 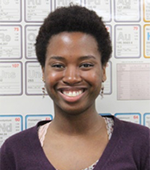 Research interests: My research interests for my degree in the Department of Polymer Science (Dr. Steven S. Chuang’s group) are the development and study of catalysts; particularly the effect of adsorbing different compounds to the surface. Overall, the goal is to develop catalysts for specific functions; an example would be the conversion of CO2 to useful products or capturing CO2 for other uses. 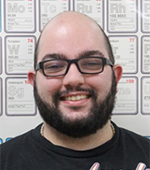 Research interests: I work with Dr. Xiong Gong and our group deals with polymer photovoltaics and photodetectors. The main aspect is learning how to change/modify interfaces to enhance current and conversion efficiencies. 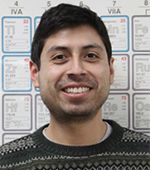 Research interests: I currently conduct work in Dr. Rouzbeh Aminij’s (Biomedical Engineering Department) soft tissue mechanics lab researching the effect of elastin on tri-cuspid valves on porcine hearts. This research is to find out how a deficiency in a protein can impact people with Marfon syndrome. 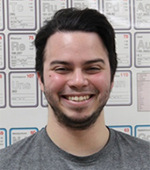 Undergrad degree and major: BS in Physics (applied to Electronics) from University of Puerto Rico, Humacao

Research interests: My research interest is to study the dynamics of frozen water on nano confinements for ice-inhibition properties for supramolecular hydrogels. This study will require the implementation of small angle neutron scattering, quasi-elastic scattering, NMR and synthesis knowledge. The delay on formation of ice is due to the trapped water molecules in the system. This work, titled Inhibiting Ice Formation on Supramolecular Hydrogels, is under the guidance of Dr. Bryan Vogt (Polymer Engineering Department). 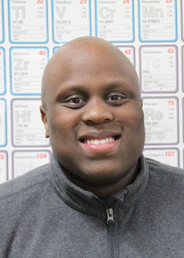 Research interests: My research interests include 3D printing materials and parts. We are interested in the optimization of machine parts for biomedical applications. Our first project will be making tensile bars, measuring stress/strain curves, and compiling a library of mechanical properties. I work under the direction of Dr. Eric Amis in the Polymer Science Department. Our group interests include high throughput processes, 3D printing, modeling and simulation. 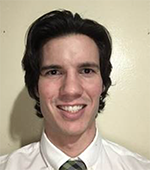 Undergrad degree and major: BS in Chemical Sciences from the University of Michigan

Research interests: I work in the Isailovic lab in the University of Toledo Department of Chemistry. The focus of our group is separation and identification of bioanalytical molecules using liquid chromatography and mass spectrometry.

I have two ongoing projects. The first involves quantification of methylated nucleosides. Methylation of deoxyguanosine is a common mutation, but some tumorous brain cells lack the capacity to repair these mutations and apoptose. My work lies in comparing variable concentrations of the methylating agent MNNG on DNA samples and quantifying their efficacy using an LC-MS method.

The second project involves toxic heptapeptides called microcystins. Microcycstins are released into lake water during algal blooms and were responsible for the water crisis during the summer of 2014 in Toledo. My group is collaborating extensively with other departments in the University of Toledo to better understand these harmful molecules. Currently I am developing a method to quantify microcystin-LR from serum samples using SPE-LC-MS. 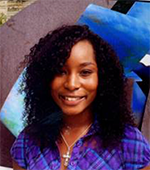 Undergrad degree and major: BS in Biology from the University of Toledo

Research interests: I am currently a PhD student working in the lab of Dr. Scott Crawley at the University of Toledo in the Department of Biological Sciences. In broad terms, the central focus of the Crawley lab is to understand how epithelial cells found in our body create their unique cellular shapes, which allows them to fulfill distinct physiological functions.  More specifically, we are interested in studying the epithelial cells that line the human intestinal tract.  These epithelial cells, known as enterocytes, remodel their shape during differentiation to create a tightly packed array of “finger-like” membrane protrusions on their apical surface.  Collectively, these protrusions are known as the brush border.  The brush border plays a crucial role in the human body, being the sole site of nutrient absorption within the digestive tract. Disruption or malformation of the brush border leads to serious disease in humans, as seen with Type IC Usher syndrome enteropathy.  Despite its importance, there is little known about how the enterocyte brush border is formed.  Our lab is interested in identifying and investigating the major molecular mechanisms involved in brush border assembly.  We are particularly interested in understanding how genetic mutations that impact these molecular mechanisms result in pathology in humans. For my role, I am studying a novel mechanism that utilizes adhesion molecules to reshape the apical surface of enterocytes during brush border assembly. Currently, I’m trying to identify and characterize new components of this adhesion mechanism in order to understand how they contribute to brush border assembly and intestinal function. 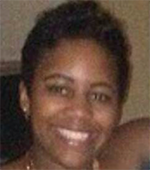 Undergrad degree and major: BS in Chemistry from Xavier University of Louisiana 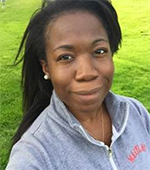 Undergrad degree and major: BA in Anthropology from the University of Maryland College Park

Research interests: Polycystic ovarian syndrome is a disorder that affects 5-10% of women of reproductive age. The disorder is characterized by irregular or absent menstruation, polycystic ovaries detected on ultrasound, and hyperandrogenemia. The disease is comorbid with obesity, cardiovascular disease, insulin resistance, and mental health disorders. The etiology is unknown. Currently, the model for my project is a prenatal androgen exposure model for PCOS with a dysfunctional metabolic phenotype that manifests in adulthood. When the developing fetus is exposed to excess sex hormones such as testosterone, this disrupts fetal programming in a process that is not well understood but well worth investigation. The project is of special interest to me because it allows me to research the activity of sex steroid receptors when hormones circulate in excess.

Research interests: I work in Medicinal Chemistry for Dr. Schiefer's lab. Our lab is focused on developing novel small molecules for Alzheimer’s disease (AD). Our primary focus is on developing agents that act by producing nitric oxide (NO). NO is essential for normal neuronal function and impaired NO signaling is implicated in AD.  We are developing a class of NO donors, known as furoxans, which have not been studied in the brain previously. Furoxans are unique among NO donors because they require activation by cellular thiols to produce NO mimetic activity. We are the first researchers attempting to attenuate reactivity to produce agents that slowly produce NO, which is desirable property of a potential AD therapy. Although furoxan efficacy requires thiol-attack to produce NO, we have observed minimal reactivity for our furoxans in the presence of cellular thiols. We hypothesize a specific subset of sufficiently reactive cellular thiols are involved in furoxan bioactivation. My main goal is to identify the proteins involved in furoxan bioactivation. To pursue this aim, I carry out interdisciplinary research involving; 1) synthesis of novel furoxan based probes, 2) confirmation of neuroprotection in cell culture, 3) bioanalytical studies to monitor furoxan reactivity and metabolism (using HPLC and LC-MS/MS); and 4) target identification techniques, such as photoaffinity labeling with click chemistry.