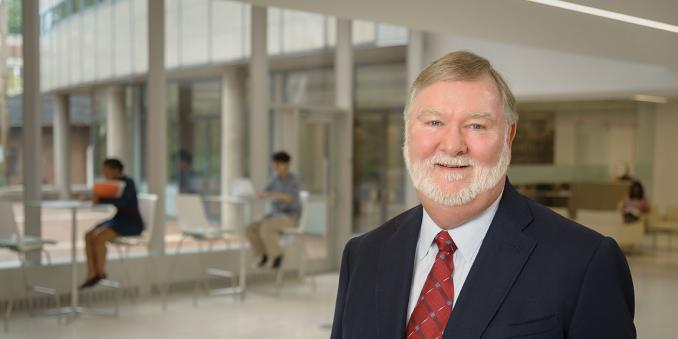 When Grover “Cleve” Gilmore agreed to lead the Jack, Joseph, and Morton Mandel School of Applied Social Sciences in 2002, his appointment was only supposed to last a year.

After all, he was a longtime professor of psychology, not social work. And, the request had come from an interim president, James W. Wagner.

“Neither of us conceived that this service would be the capstone of my career,” Gilmore said.

But now, as the school launches a major new curriculum this fall, in a building expanded and fully renovated in 2016, with an endowed deanship announced in 2013, he will close nearly two decades of social work school leadership.

“Cleve’s commitment to excellence and innovation in social work has lifted the Mandel School in so many ways,” President Barbara R. Snyder said. “We appreciate all that he has contributed to the school and broader university, and wish him all the best in his retirement.”

During Gilmore’s time as dean, the Mandel School launched an undergraduate social work minor, six research and training centers (Begun, CIP, PERI, CIN, NIMC and Trauma), and the university’s first short-term study abroad program, which is open to all students to provide opportunities to learn about social policies and practices. Gilmore also recognized the opportunities inherent in online learning early, leading the Mandel School’s establishment of the university’s first online degree program in 2013.

The school also flourished philanthropically during his years as dean. In the university’s most recent capital campaign, Forward Thinking, the Mandel School raised $44 million, exceeding the original campaign goal by $12 million. The funds supported the renovation of the Mandel School building, program support, scholarships and endowed professorships—Gilmore secured 38 new endowed scholarships during his tenure, increasing the number of scholarships by 238% and the scholarship endowment value by 172%. $9.2 million was additionally raised for the construction of the Mandel Center for Community Studies Building, which opened in 2007. The Mandel School now comprises two buildings and has the most technologically-advanced classrooms on campus.

Under Gilmore’s leadership, the Mandel School also ranked among U.S. News & World Report’s top 10 social work schools in the nation from 2008 through to the present. It also has consistently been the No. 1 school in Ohio.

“Cleve has demonstrated tremendous vision in leading the Mandel School during a time of enormous change in higher education and society more broadly,” Provost Ben Vinson III said. “He has understood the importance of adaptation and flexibility while maintaining the school’s focus on developing leaders of social change.”

From the very start, Gilmore’s work involved interdisciplinary research. Over the decades he has collaborated with colleagues in biomedical engineering, geriatrics, ophthalmology, neurology, pulmonology and psychiatry.

Gilmore pioneered methods to improve Alzheimer’s patients’ perceptual and cognitive performance, demonstrating that a portion of the cognitive problems associated with aging—along with the memory problems in Alzheimer’s disease—may be attributed to sensory decline and not to higher-order cognitive functions.

In addition to his research, Gilmore devoted substantial time to teaching and mentoring students. Gilmore received the John S. Diekhoff Award for Distinguished Graduate Teaching in 1984, and was often nominated for the Carl F. Wittke Award for Excellence in Undergraduate Teaching. He also chaired the psychology department for five years and the Faculty Senate for one, in 1989-1990.

The university will launch a national search for the Mandel School’s next dean; details regarding that process will be shared as they are finalized later this semester.

“It has been an honor to serve as dean of the Mandel School these last 20 years and as a member of the Case Western Reserve faculty,” said Gilmore, whose retirement is effective June 30, 2021. “I have learned a great deal from our extraordinary faculty, staff, students, alumni and friends.”

This story appeared in The Daily on September 8, 2020.