9/11 Chronomania: Terror and the Temporal Imagination 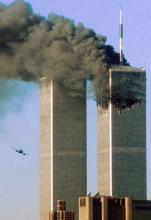 For billions around the world, the events of 9/11 were experienced as a rupture, a periodizing event that cast the world into a new period of danger and uncertainty. Whether it signaled the end of a brief era of optimistic globalism or a bold retaliation against an ungodly global hegemon, understood as a deeply historical event or an apocalypse outside ordinary time, one of 9/11’s most salient effects has proved to be temporal in nature. The experience of temporal disorientation and unsettlement has been of paramount importance to the narratives that address the attacks and contend with their unfolding legacy in the subsequent decade.

In this talk, Justin Neuman, Assistant Professor of English at Yale University, asks why and in what ways 9/11 altered time consciousness by tracking the rhetoric of temporality in The 9/11 Commission Report, Don DeLillo’s Falling Man, Ian McEwan’s Saturday, and Jess Walter’s The Zero. Beginning with the lexicon of the war on terror, including its temporally overdetermined rhetoric of ‘the homeland,’ ‘preemption,’ ‘fundamentalism,’ and, of course, the name-date ‘9/11’ itself, this talk considers the obsession with time and temporal disruption that characterizes representations of 9/11 across a variety of media forms.”

This event is sponsored by by the Baker-Nord Center’s Religion and Secularium Across the Humanities seminar group.