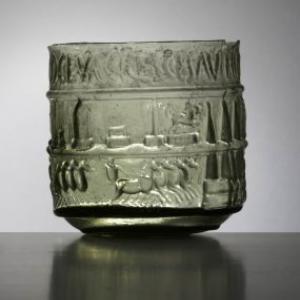 The Roman Empire produced a rich range of souvenirs and memorabilia commemorating cities, monuments, sporting and theatrical events, and religious rituals. At a time when literacy was limited and visual communication was essential, these objects were a critical means for generating and mediating memory and knowledge of their represented subjects. This talk examines various examples of Roman souvenirs and memorabilia, including glass flasks engraved with scenes of tourist destinations, miniature replicas of famous cult statues, and drinking cups with pictures of famous gladiators and charioteers. Maggie Popkin, Assistant Professor in the Department of Art History and Art, explores how these objects constructed knowledge in an era before mechanical and digital reproduction. Although often overlooked by historians of Roman art, souvenirs and memorabilia shed fascinating light on how objects and images helped ancient Romans conceptualize their world. 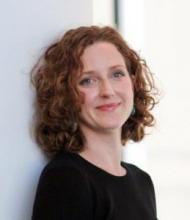 Professor Popkin specializes in ancient Roman art and architecture. Her research interests include the relationship between art, spectacle, and ritual in the Roman world and the impact of visual culture on individual and social remembering in the classical world.

Prof. Popkin has published articles on a range of topics, from archaic Greek vase painting to materiality in Republican Roman architecture. Her articles have appeared in journals including Hesperia, the American Journal of Archaeology, the Journal of the Society of Architectural Historians, and the Journal of Late Antiquity. She has presented her research at numerous national and international conferences and colloquia. Her first book, The Architecture of the Roman Triumph: Monuments, Memory, and Identity (Cambridge University Press, 2016), examines the monuments built along the path of the Roman triumph, an elaborate ritual celebrating Roman military victories over foreign peoples, and their role in shaping how Romans experienced and remembered the triumphal ritual. Her second book project, Souvenirs, Memorabilia, and the Construction of Knowledge in the Roman Empire, investigates ancient souvenirs and memorabilia and their profound role in generating and mediating memory and knowledge of people, places, and events in ancient Rome.

Before joining the faculty at CWRU, Prof. Popkin was the Samothrace Postdoctoral Fellow at the Institute of Fine Arts-NYU and Emory University. She has taught classes at the University of Hartford and New York University and has worked in the education departments of the Williams College Museum of Art and the Smith College Museum of Art. She has excavated at Selinunte in Sicily and at Samothrace in Greece, where she is an ongoing member of the archaeological team and a principal investigator for a project to explore the original context of the famous Nike of Samothrace; this project recently received a three-year collaborative research grant from the National Endowment for the Humanities. Professor Popkin has received various grants and awards, including from the Fulbright Program and the Max Planck Institute’s Memoria Romana International Research Project. In Spring 2017 she will be a Faculty Fellow at the Baker-Nord Center for the Humanities at CWRU, and in Fall 2017-Spring 2018 she will be a recipient of a National Endowment for the Humanities Fellowship to work on her second book.