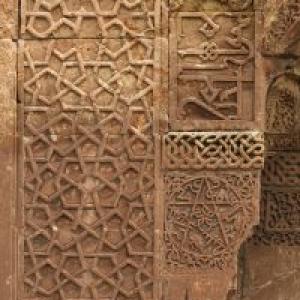 The conventional view holds that geometric star-and-polygon patterns in medieval Islamic architecture were designed using a straightedge and a compass. Peter Lu, a research associate at Harvard University, will present his findings that, instead, a wide variety of patterns with five- and ten-fold symmetry were conceived as tessellations of specific decorated puzzles pieces, called girih tiles, that appear in medieval Islamic architectural scrolls. Beginning in the 12th century, patterns designed with these girih tiles appeared throughout the Islamic world, from North Africa to the Middle East and Central Asia, for more than half a millennium—and in some cases exhibit mathematical principles that we in the West did not understand until the past few decades. This event is co-sponsored by the Departments of Physics and Art and Art History.

This event is free an open to the public.