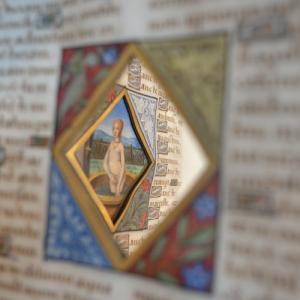 Nature, medieval philosophers exclaimed in an unsteady chorus, abhors a vacuum. Medieval art, exclaims a much more assured collective scholarly voice, equally abhors the same: hence, the notion of horror vacui, the fear of empty space, is often construed as a definitive feature of Gothic material culture in its many manifestations. In her lecture, Elina Gertsman, Professor in the Department of Art History and Art, explores complex conversations among philosophy, physics, mathematics, piety, and image-making in order to suggest that late medieval art, in its constant attempts to grapple with the unrepresentability of the invisible, is in fact predicated on new engagements with emptiness, holes, and erasures.

An informal lunch will be served.

Professor Gertsman specializes in Gothic and late medieval art. Her research interests include issues of memory and perception; uncanny animation of inanimate objects; medieval image theory; performance/performativity; multi-sensory reception processes; late medieval macabre; materiality and somaticism; and medieval concepts of emotion and affectivity. Many of these topics are explored in the broad range of graduate and undergraduate courses she teaches at CWRU.

Prof. Gertsman is the author of The Dance of Death in the Middle Ages: Image, Text, Performance (2010) and Worlds Within: Opening the Medieval Shrine Madonna (2015). The Dance of Death, which was awarded the Medieval Academy of America subvention and the Samuel H. Kress Research Award from the International Center for Medieval Art, won the John Nicholas Brown Prize from the Medieval Academy of America for the best first book in medieval studies in 2014. Worlds Within was awarded the Millard Meiss Publication Grant and the Samuel H. Kress Research Award from the ICMA, and was shortlisted for the 2016 Charles Rufus Morey Prize, which honors an especially distinguished book in the history of art, published in the English language. Prof. Gertsman is the editor of Visualizing Medieval Performance: Perspectives, Histories, Contexts (2008) and Crying in the Middle Ages: Tears of History (2011), and co-editor of Thresholds of Medieval Visual Culture: Liminal Spaces (2012). In 2015, she guest edited an issue of the journal Preternature: Critical and Historical Studies on the Preternatural (published by Penn State Press), titled “Animating Medieval Art,” and in 2016 collaborated with Stephen Fliegel on the catalogue that accompanied their centennial focus exhibition at the Cleveland Museum of Art, Myth and Mystique: the Cleveland’s Gothic Table Fountain.

Prof. Gertsman’s articles have appeared in many peer-reviewed collections and journals such as Gesta, Studies in Iconography, and Art History. A recipient of several prestigious fellowships, including awards from the National Endowment for the Humanities, the Mellon Foundation, and the Kress Foundation, she was recently awarded a year-long fellowship from the American Council of Learned Societies to pursue work on her third monograph. She currently serves on the board of directors of the International Center for Medieval Art.

Prof. Gertsman is working on several new books including the monograph on emptiness in later medieval art, tentatively titled Nothing is the Matter (contracted by Penn State Press); an edited volume on medieval abstraction; and a co-edited Festschrift in honor of Richard K. Emmerson (for Brepols). In 2018, the book she co-authored with Barbara Rosenwein, The Middle Ages in 50 Objects, will be published by Cambridge University Press.

In 2015, she was the winner of the Diekhoff Award for Distinguished Graduate Teaching.