Faculty Work-in-Progress – The Secrets Between Us: A Conversation with Thrity Umrigar 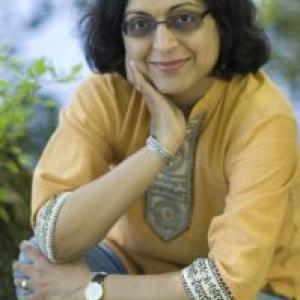 DUE TO DANGEROUSLY LOW TEMPERATURES, THIS EVENT HAS BEEN CANCELLED.  IT WILL BE RESCHEDULED FOR THE FALL 2019 SEMESTER.

Thrity Umrigar, Professor in the CWRU Department of English, will talk about the inspiration for her new novel and the challenges of writing a sequel.

Umrigar is the best-selling author of the novels Bombay Time, The Space Between Us,If Today Be Sweet, The Weight of Heaven, The World We Found and The Story Hour. She is also the author of the memoir, First Darling of the Morning.  Her books have been translated into several languages and published in over fifteen countries. She is the Armington Professor of English at Case Western Reserve University in Cleveland.

The Space Between Us was a finalist for the PEN/Beyond Margins award, while her memoir was a finalist for the Society of Midland Authors award. If Today Be Sweet was a Chautauqua Literary and Scientific Circle selection, while her other books have been Community Reads selections. Thrity is the winner of the Cleveland Arts Prize, a Lambda Literary award and the Seth Rosenberg prize.

Thrity was born in Bombay, India and came to the U.S. when she was 21. As a Parsi child attending a Catholic school in a predominantly Hindu country, she had the kind of schizophrenic and cosmopolitan childhood that has served her well in her life as a writer. Accused by teachers and parents alike of being a daydreaming, head-in-the-clouds child, she grew up lost in the fictional worlds created by Steinbeck, Hemingway, Woolf and Faulkner. She would emerge long enough from these books to create her own fictional and poetic worlds. Encouraged by her practical-minded parents to get an undergraduate degree in business, Thrity survived business school by creating a drama club and writing, directing and acting in plays. Her first short stories, essays and poems were published in national magazines and newspapers in India at age fifteen.

After earning a M.A. in journalism  in the U.S., Thrity worked for several years as an award-winning reporter, columnist and magazine writer. She also earned a Ph.D. in English. In 1999, Thrity won a one-year Nieman Fellowship to Harvard University, which is given to mid-career journalists.

While at Harvard, Thrity wrote her first novel, Bombay Time. In 2002 she accepted a teaching position at Case Western Reserve University, where she is now the Armington Professor of English.  She also does occasional freelance pieces for national publications and has written for the Washington Post and the Boston Globe’s book pages.

Thrity is active on the national lecture circuit and has spoken at book festivals such as the L.A. Festival of Books, the Tuscon Book Festival and the Miami Book Fair International; at universities such as MIT, Harvard University, and Spelman College; and at literary societies, civic and business organizations and public libraries all across the country.

This event is free and open to the public.  Registration requested.