Ovid, Actaeon, and the Truths of Myth 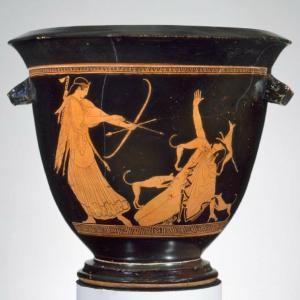 THIS EVENT IS CANCELLED DUE TO CONCERNS ABOUT THE CORONAVIRUS AND COVID-19.

This event is part of the 2020 Cleveland Humanities Festival: TRUTH

Myth has often been used to express truths that are too dangerous to be stated in the open. An example is the myth of Actaeon, the story of the young hunter who is punished for stumbling upon the goddess Diana bathing. This has proved to be one of the most enduring and controversial of the narratives told by Ovid in his epic poem Metamorphoses— controversial for his version emphasized not, as was customary, Actaeon’s intentional violation of the goddess’s private space, but rather his innocence. The same myth was framed in personal terms in Ovid’s later poetry, written in the period of his political exile, as an example of unjust punishment by autocratic powers. In her talk Carole Newlands, Professor of Classics at the University of Colorado, Boulder, will explore the tension between voyeurism and victimhood that runs through the Actaeon myth in literature and the visual arts from Ovid to the present, as artists and writers have continued to engage with the controversy raised by Ovid in his narrative of Actaeon, thus demonstrating the enduring importance of myth in exploring broader political and cultural truths.

This event is co-sponsored by the Department of Classics.