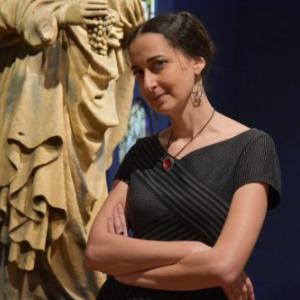 Professor Elina Gertsman (Department of Art History, Case Western Reserve University) and Vincent Debiais (Institut National d’Histoire de l’Art, École des hautes études en sciences sociales) received a $20,000 grant from the French-American Cultural Exchange Foundation for their collaborative project “Abstraction Before the Age of Abstract Art.” The grant is administered in partnership with the French Embassy in the United States, with the additional support provided by the Paccar Foundation, the Florence Gould Foundation, the Franco-American Fulbright Commission, and the French Ministries of Foreign Affairs and International Development, and of National Education, Higher Education and Research.

Interdisciplinary in nature, the project aims to reformulate the very way that we approach the history of representation. The concept of abstraction has always been considered the domain of modern and contemporary art; Gertsman and Debiais intend to challenge this narrative. Focusing on the long and rich tradition of nonfigurative art, which remains virtually unacknowledged by the field, they aim to identify and explore the concept of abstraction — predicated on the pre-modern theological articulation between truth, facts, and language — as it develops and transforms throughout the Middle Ages and beyond.

Among the many planned collaborative activities is the creation and continuous development of an internet-based platform for collecting images of abstraction in medieval and early modern art; a series of workshops in France and in the United States, conceived as spaces for open discussion of the concept of “abstraction,” that will include participation by senior and junior scholars as well as pre- and post-doctoral students; and two public lectures in French and American diplomatic institutions, intended to present the results of the project and to promote the France-USA scientific collaboration in the fields of Humanities and Social Sciences.

Gertsman and Debiais hope that the project is only the first step towards a long-term collaboration between them and their respective research institutions. It is meant to lay the foundations of a permanent transatlantic seminar between CWRU and the EHESS, dedicated to the ongoing and cutting-edge dialogue between medieval and modern/contemporary art. The early results of the project will be presented at the end of the first year to the Florence Gould Foundation, along with a draft of a more ambitious program of research and cultural activities on the same topic, including a proposal for a large public exhibition based on the material gathered at the image-collection platform.