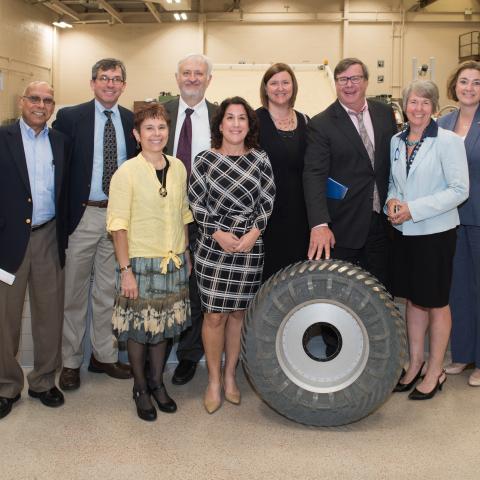 It’s a safe bet that most of you have heard of NASA; its academic breakthroughs, it’s responsibilities and interstellar accomplishments. What you may not know is that the first NASA administrator was also the 4th president of the former Case Institute of Technology. T. Keith Glennan, for whom our Glennan building on campus is named, had a diverse and accomplished career. Glennan became the president of the Case Institute of Technology in 1947. During his tenure, Case established itself as one of the top engineering schools in the United States. In 1958, President Eisenhower tapped Glennan to create our citizen space agency. He served as the first administrator for NASA from August 19, 1958 to January 20, 1961. A short time after NASA's formal organization, Glennan incorporated several institutions involved in space exploration from other federal agencies into NASA to ensure that a viable scientific program could be reasonably conducted for the long-term. He brought in part of the Naval Research Laboratory to create the Goddard Space Flight Center and brought in the NACA Lewis Flight Propulsion Laboratory in as the NASA Lewis Flight Propulsion Lab, now known as the NASA Glenn Research Center just down the road from Case.

As you can see, Case Western and NASA have a long, interwoven history of innovation and exploration. In order to deepen our partnership with Glenn in particular, a team of university research leaders including Sue Rivera, VP of Research & Tech Management, and Jim McGuffin-Cawley, Interim Dean of the Case School of Engineering recently met with the Director of the NASA Glenn Research Center, Dr. Janet L. Kavandi, and her leadership team. Currently, both the Center’s Deputy Director, Dr. Marla E. Pérez-Davis, and the Director of the Office of Technology Incubation and Innovation and Center Chief Technologist, Dr. John M. Sankovic, are Case Western Reserve alumni. Dr. Pérez-Davis earned her Ph.D. in chemical engineering while Dr. Sankovic earned both his master’s and doctorate degrees in biomedical engineering. There are currently 142 Case alumni working at the NASA Glenn Research Center.

The CWRU team had the opportunity to visit a few of NASA Glenn’s many laboratories, only scratching the surface of the cutting edge research and innovation happening across the Center’s grounds. There are nearly one hundred buildings and three thousand researchers (almost the same number as our entire CWRU faculty) on NASA Glenn’s campus. The group visited the Exercise Countermeasures Lab (ECL), the Electric Propulsion Lab (EPL), and the Simulated Lunar Operations (SLOPE) Lab, just to name a few stops on their itinerary. Each lab had a unique mission. For instance, the focus of the ECL is primarily to learn what happens to astronauts physically while they are living in a zero gravity environment. Conversely, the SLOPE Lab is where rover components are tested for their ability to navigate and investigate planetary surfaces from the moon to Mars. We are fortunate to have such an important partner only 25 minutes away from our campus!