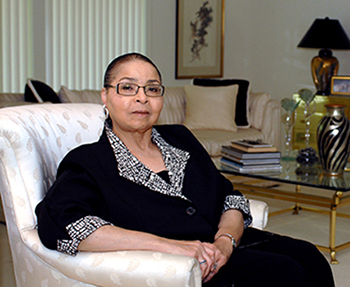 On her birthday in 1968, Diane McDaniel received an unforgettable phone call, offering the most impactful gift she could have imagined.  Her Glenville High School principal was on the other end of the line with fantastic news - Baldwin Wallace College had instituted a scholarship for underrepresented students, and he intended to nominate her as a recipient.  Although McDaniel was in the top ten percent of her graduating high school class, university tuition costs presented insurmountable financial barriers for her family.  With just a few words and an eye toward advancing the future, McDaniel received the chance to continue her education.

After completing a bachelor’s degree at Baldwin Wallace, McDaniel secured a human resources position at Acme-Cleveland Corporation.  With assistance from this employer, McDaniel returned to school and earned her MBA in 1987 from the Weatherhead School of Management at Case Western Reserve University.  McDaniel had a successful career with Acme-Cleveland and the Cleveland Metroparks and now enjoys retirement.

Immediately after her graduation from Weatherhead, McDaniel began supporting the school through her dollars and her time.  However, she wanted to make a more permanent impact on tomorrow’s students.

“I always thought you needed millions of dollars to set up a scholarship,” said McDaniel, but she was delighted to learn that she was mistaken.  With a bequest of $50,000, she worked with the Weatherhead School’s development team to establish the Diane O. McDaniel Endowed Scholarship Fund for a diverse group of students pursuing their MBA or Master’s in Positive Organizational Development.

McDaniel was given life-changing opportunities by people who saw her potential and offered her financial support and encouragement. She’s excited and proud that her legacy will allow her to do the same for others.