Peter Hovmand, PhD, MSW, joined the Case Western Reserve University faculty in July, 2020. They are the author of the book, Community Based System Dynamics, a practical guide for strengthening communities through system dynamics, and founder of the Brown School’s Social System Design Lab at Washington University in St. Louis. Here, Peter talks about their work and the past, present and future of community-based system dynamics. 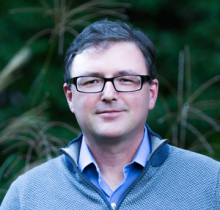 Q: How do you describe your work to someone who’s not familiar with systems thinking?

A: I study how systems change, with a specific focus on dynamics of structural violence.

Q: Was there an “aha” moment in your life when you realized that understanding systems is key to addressing difficult social problems?

A: At first, I was deeply skeptical that there was any value to building a computer simulation model of a social system. As an electrical engineer and math major, I had a good sense of the problems in understanding that can arise in feedback systems with bad data or flawed mathematical models. I really did my best to avoid system dynamics because it just didn’t seem feasible, let alone useful.

Then I had an experience in graduate school as part of a community needs assessment for sexual and relationship violence prevention. I heard a story in which it seemed we could effectively change students’ behavior, or at least their understanding of expectations, around noise and alcohol use in a residence hall within a few weeks, but not around harassment or sexual assault. I thought of a possible explanation underlying the dynamics, and this seemed like a good opportunity to build a small system dynamics model to test that thinking, much in the way that I used computer simulation in electrical engineering. I discovered my explanation was wrong, but in analyzing the simulation model I also found a leverage point, a solution. That provided the basis for developing an innovative prevention program. Seeing the positive impact that the program had in changing community norms made me want to study system dynamics more.

Q: You’re recognized as a pioneer in bringing community members and other stakeholders into system dynamics.  Did you begin your career in a more traditional fashion, doing systems work with only trained professionals? How did you make the shift to a community-based approach?

A: Yes. I was actually dead set against doing group model building. I saw my professor try to do this in several projects and it didn’t go well. Moreover, the prevailing thinking at the time was that one should specialize and that really only a handful of people do both simulation modeling and group model building. It just seemed too hard to try and do both well, and a challenging proposition to think that one can somehow build mathematical models interactively.

But then I was part of a project in Ulaanbaatar, Mongolia with Save the Children. The research team had spent months preparing background reviews and preliminary modeling on the problem of school dropout, only to discover within a few hours of presenting our initial model that we had addressed the wrong problem. By the end of the day, we had drawn a new structure with the staff, so, despite my best efforts to avoid group model building, that’s what we were doing.

We revised the causal map during the next two days with the group working interactively. Over the weekend, without our knowing it, the staff translated the diagram into Mongolian for a presentation to a government ministry. I was struck by the fact that, in a few days, it was possible for an organization to learn the conventions of system dynamics through group model building, and then use the results in their own language to describe something innovative to an important stakeholder. I wanted to understand that better.

The move to doing this in community settings came during my work with Foundation for Ecological Security (FES) in India where they were taking a systems approach to understanding communities and ecological restoration/conservation. They had some exposure to system dynamics through books, and so we did our first workshop using group model building scripts. The first two days with the staff were rough, it just seemed like things were too technical, the learning curve too steep. One FES staff member asked, “How are we going to take this to the people?” On day three, we did a workshop with farmers on soil fertility, a pressing problem that had emerged as a concern in their community. Very quickly things changed as farmers picked up on the concepts quickly, one farmer for example explaining the diagrams, conventions and stories to another farmer. A senior FES staff member later said something to the effect of,

“I think they’ve been telling us this for the last 20 years, but this is the first time we've had a way to hear what they are saying.”

From there, we just kept building on these methods by taking our cues from community members and co-developing new tools as we went along. People often misunderstand this work as a recipe for engaging and working with communities and want to know what the linear steps are, but it rarely works that way. There is a process, things to look for, good practices, etc.—many of which are not unique to community-based system dynamics and are often common sense about how to build relationships and trust—but what happens is emergent, a language for sharing, talking about, and understanding dynamic systems.

Q: You’ve hit the ground running since you came to CWRU, with key roles in projects in the CHI Center and the Cuyahoga County Citizens' Advisory Council on Equity—both addressing systems underlying structural racism—and work on Cleveland’s food systems with the Swetland Center for Environmental Health. What other areas / problems would you like to work on in the future?

A: I’m very interested in the idea of using community-based system dynamics to support design driven innovation. For example, consider the inequities in education, health, or work. Addressing these inequities is not just about eliminating a problem of differences as measured, but about shifting what it means to go to school, visiting a health clinic or getting the job. Goals and metrics help can help us evaluate progress, but models can do a lot more. They can help us imagine a new system of meaning, how we might get there, and where to focus our attention as we lead change.

Q: What do you think are some of the most important problems facing Northeast Ohio that would benefit from a system dynamics approach?

A: Back in the 1970’s, Donald Schön talked about the pace of change exceeding our ability to adapt and learn and what happens if we don’t address this. He warned that the consequence was epistemic nihilism, a belief that there is no hope in even trying to understand and sustainably govern the world we live in. Today we see many of these challenges playing out. Greater Cleveland, like much of Northeast Ohio, has been through a lot, so the prospect of even more change on the horizon, and happening at a pace we haven’t seen before, can feel overwhelming and limit our ability to think through what needs to happen. System dynamics is not easy, but it does provide a powerful tool for understanding change and unlocking a collective imagination to find solutions and hope.

Q: Do you have a favorite CBSD success story?

A: Perhaps the best story is about our work with high school students in the Ritenour School District, near St. Louis. We had been working with the principal, Dr. Tony Robinson, using group model building on several school issues like fights in schools and school academic achievement, and he kept pressing us, “OK, so when do we get to simulation? I want our students to see this.” So we had a set of four 2-hour workshops with high school students on an issue they defined—school participation—and in the last workshop, they worked in small teams to build small computer simulation models with a little bit of introduction and coaching from us.

One of the students working in the team focusing school clubs, asked me for some help because “We did something wrong; we aren’t seeing anything.” Looking at the model and equations, I saw that they had done everything right, but I noticed the parameters and asked them how they estimated how many students are joining the club and the average length of time they stay involved. They talked this through and arrived at the insight, from the simulation model, that the problem wasn’t the inflow—recruitment—but retention. If they improved retention, participation in their clubs would increase.

Later that spring, Peter Senge—a leader in systems thinking and organizational learning with a background in system dynamics—was eating pizza with the students to get a sense of what they had been doing with systems thinking.  The student that had asked me the question shared how they had been modeling participation. Peter looked up from his pizza, somewhat skeptical and said, “You mean you’ve been drawing causal loop diagrams, not simulation modeling?” She shot back without skipping a beat, “No, we have been doing simulation modeling” and proceeded to share the insight they learned that day from the model. Mary Scheetz, the assistant superintendent who brought systems thinking to Ritenour and a leading thinker in the K-12 systems thinking community, would later talk about the impact of this work on raising students’ educational aspirations, an important step in closing the education equity gap.