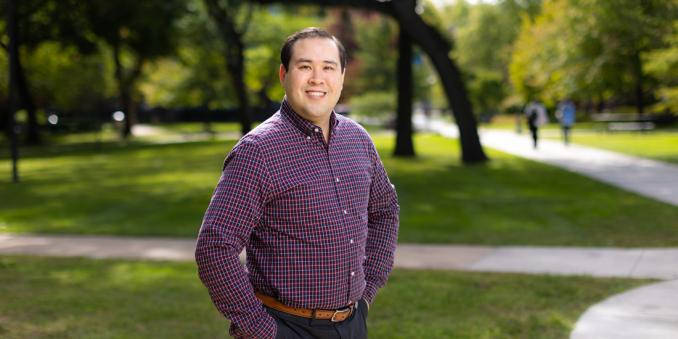 October is Filipino American History Month, which commemorates the first recorded presence of Filipinos in the continental United States. To learn more about Filipino culture, The Daily is putting the spotlight on Filipino American members of the Case Western Reserve University community to celebrate their accomplishments—and shed light on their experiences at CWRU.

“Bayanihan.” According to JP Graulty, this Tagalog word best characterizes Filipino culture. Its meaning? A spirit of communal unity and cooperation.

“One historical form of bayanihan was the rural tradition of neighbors helping to relocate a family by gathering many volunteers in the community to literally carry the whole house to a new location using long bamboo poles,” said Graulty, whose family is from Manila, capital of the Philippines.

Today, the idea of bayanihan is integral to Graulty’s work as program manager for the Community Innovation Network at the Jack, Joseph and Morton Mandel School of Applied Social Sciences.

He recently led a training for a group of community organizers who work in Cleveland neighborhoods; it focused on building knowledge and skills for the organizers to coordinate and facilitate bayanihan in their neighborhoods.

“The community building work I do is also crucial to our success as a university,” Graulty explained. “At the Community Innovation Network, we believe that authentic community engagement must include the voices of everyday community residents, who are often left out and marginalized.”

Bayanihan has been an aspect of Graulty’s life since he can remember, especially growing up in Cincinnati, where there was a small—but mighty—Filipino community.

“[The Filipino community] would often gather on weekends to share food, friendship and fun,” Graulty said.

One story that illustrates what these gatherings were like is his brother’s high school graduation party, which included friends from school, along with their usual group of Filipino families.

“I was particularly struck by the difference in reaction to the spread of food and the party atmosphere,” he said. “His school friends said, ‘Wow, this is like Thanksgiving at my house!’ Whereas for our typical group of Filipino families, this was a pretty typical weekend gathering.”

To Graulty, this exchange elucidated the spirit of Filipino community building, hospitality and celebration—aspects of Filipino culture that are largely unknown because of the community’s small numbers in the United States.

“Filipinos are often overlooked because of our relatively small numbers. I’m proud of my alma mater for including Filipino American History Month as we celebrate the beautiful diversity of our campus community that makes CWRU such a wonderful place to work and learn,” said Graulty (CWR ‘10).

Stay tuned to The Daily through Oct. 28 to learn about other Filipino American members of the Case Western Reserve University community.