Western Reserve College was founded in 1826 in Hudson, Ohio, about 30 miles southeast of Cleveland. The college—the first in northern Ohio—took its name from the surrounding region (known at that time as the Western Reserve of Connecticut) and emphasized standards, such as the classics, in its curriculum. Yet it stood out in the mid- and late-19th century as one of only a few institutions that sought innovation and embraced the sciences. By 1887, the college had begun hiring forward-thinking scientists, including Edward E. Morley, best known for his collaboration with fellow professor Albert Michelson on the Michelson-Morley Experiment, which inspired Albert Einstein's work in relativity.

As the 20th century neared, the city of Cleveland, Ohio, was on the rise. A post-war economy vaulted Cleveland to the forefront of American cities with unprecedented population and financial growth. And it was hungry for a university. With funding from American industrialist Amasa Stone, the college moved in 1882 to "uptown" Cleveland, where it lives today, and assumed the name Western Reserve University.

But the new university wouldn't occupy this stretch of Euclid Avenue alone. In 1877, Leonard Case Jr., a philanthropic citizen of Cleveland and early benefactor of the engineering school, began laying the groundwork for the Case School of Applied Science. He initiated a secret trust to endow a polytechnic school in Cleveland. This school would train men in engineering and applied science, enabling them to build on a young, growing nation's vast resources. Within four months of his death in 1880, the trust was administered and the Case School of Applied Science was born.

Classes initially were held in the Case family's downtown Cleveland home until a provision to Stone's gift—that Western Reserve University and the Case School of Applied Science occupy adjoining campuses—led to the school's relocation in 1885 to what is now known as University Circle on the city's east side. Funds for the land, however, had to be raised by the community.

A committee for the two institutions raised $119,400 from 56 donors by March 1881. A land purchase discount from Cordelia Ford and Liberty E. Holden, whose 43-acre property formed the early campus, netted $33,000. The Ford family's University Circle-area homesteads were the initial locations of the Women's College of Western Reserve University and the School of Law.

The joint land purchase was the first of many collaborations between Western Reserve University and the Case School of Applied Science. Over the years, the university developed strong liberal arts and professional programs, while the institute, which adopted the name Case Institute of Technology, became a top school of science and engineering.

The two institutions agreed their 1967 federation would create a complete university worthy of national distinction. Case Western Reserve University immediately became a leading institution for academics and research, as well as one the nation's top-ranked universities.

In 1992, the restructuring of core program areas into the College of Arts and Sciences and the Case School of Engineering signaled the end of the transition from the two predecessor institutions. Today, the university today thrives on collaboration across academic and administrative divisions and partnerships with dozens of other institutions, including its neighbors in University Circle.

Trace deeper into Case Western Reserve lore through the University Archives, which hosts a rich collection of historical materials and data—from university presidents and varsity coaches to the changing campus and nearly 200 years of events—that tells our story.

Our history is so rich that an entire center on campus, the Institute for the Study of the University in Society, has been designated to chronicle our role as a research university. Learn how Case Western Reserve was involved in the Underground Railroad, addressed early city needs and improved access to higher learnings in the early 20th century. Read about turn of the
century CWRU > 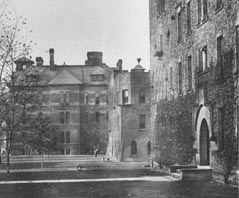 See an early aerial of campus > See a modern map of campus >