Go to case.edu
College of Arts and Sciences
Chiel Lab 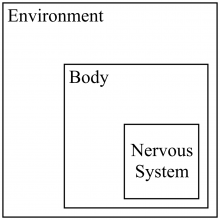 Above is a schematic showing how the brain is embodied (that is, works within the body and is constantly in communication with it), and the brain and body are in turn situated within a complex environment, which both provides input to the animal and is continuously altered by the animal’s ongoing behavior. Taken from: Chiel, H. J., & Beer, R. D. (1997). The brain has a body: Adaptive behavior emerges from interactions of nervous system, body and environment. Trends in Neurosciences, 20(12), 553–557.

Although understanding the mechanisms of adaptive behavior is a daunting challenge, because one needs to study the brain, the body, and their interactions with one another and the environment, it is clearly worth the effort. An approach to addressing this challenging problem is to choose an experimentally tractable system that allows one to monitor and manipulate all of these components.

Rationale for Studying A Sea Slug

That has been the rationale for studying the marine mollusk Aplysia californica.

The animal is capable of various forms of adaptive behavior that are found in many other animals, including feeding, avoiding predators, and mating.

The animal is very robust, because it lives in tide pools near the shoreline, and as a consequence, when the tide goes out, it is exposed to changes in temperature, how salty the water is, the amount of light, and it is exposed to moving waves which can sometimes be very strong.

As a consequence of Aplysia’s robustness, it is possible to study its behavior in captivity. In particular, we have focused on one of the animals’ favorite behaviors: feeding.

The animal’s grasper pulls food in during feeding; the grasper is controlled by the feeding musculature, also called the buccal mass. An aspect of Aplysia’s feeding behavior that makes it particularly interesting is that the animal feeds on a very wide variety of different seaweeds that have very different shapes and toughness. The difference in mechanical properties requires that the animal rapidly adjust its behavior to cope with changes in food during feeding, just as our teeth, tongue and jaw muscles adjust rapidly while we eat.

Seaweeds can take various forms. For example, sea lettuce, also known as Ulva, generally grows in sheets; Gracileria has a long, thin, highly branched structure; sea grapes, also known as Botryocladia, have a bulbous grape-like structure at their tips. Changes in the texture, toughness and thickness of seaweed require the animal to make moment-to-moment adjustments as it feeds.

Although the adaptive behavior of Aplysia is similar to that seen in more complex animals, and in humans, its nervous system is much easier to analyze. In the entire nervous system, there are only about 20,000 neurons, organized into discrete collections called ganglia. Each of these ganglia are dedicated to the sensing and control of particular parts of the animal. For example, the abdominal ganglion controls many important functions, such as heartbeat, and components of the body responsible for the animal’s breathing behavior, including respiratory pumping of water over the gill and control of the siphon. The pedal/pleural ganglia play important roles in controlling locomotion and other movements of the head of the animal. The buccal ganglia control the feeding apparatus, the buccal mass. The cerebral ganglion controls the head and lips, and is the one ganglion that receives input from all the other ganglia, and thus is likely to provide overall control signals that allow the animal to choose among different behaviors as the environment changes. 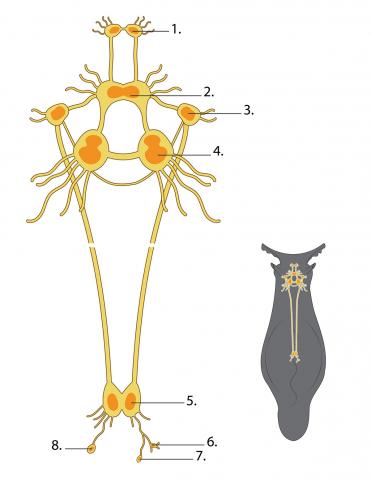 The nervous system is unusually suitable for analysis, which was the reason that investigators were initially attracted to study the animal. The neurons are large, ranging from about 30 microns in diameter, which is about three times the thickness of a human hair, to as large as a millimeter in diameter in full grown animals. The largest neurons are visible without magnification! The largest feature of the neurons are their cell bodies—called the soma—and are generally orange in color, making it much easier to see them. In general, the cell bodies are near the “decision point” for the neuron, that is, the place at which the neuron first initiates a signal that it sends to other neurons. The cell bodies are themselves capable of generating the signal, called the action potential, and because the cells are so large, electrical currents travel quickly throughout the cell. Therefore, we can use electrodes to excite the neurons electrically, either increasing the output of an entire neuron, or inhibiting it and blocking its entire output. This is very unlike neurons in insects and crustacea, where the cell body is generally not excitable and is not near the “decision point” for the neuron.

Above is a schematic diagram of the collection of nerve cells controlling feeding in Aplysia, known as the buccal ganglion. On the left side is shown the neurons with the sheath that covers them removed, and on the right side is shown the ganglion with the sheath still intact. Nerves emanate from the ganglia, each containing neuronal axons that carry information to and from the feeding apparatus (BN1, BN2, BN3: buccal nerves 1, 2, 3; RN: radular nerve; EN: esophageal nerve) and the cerebral ganglion (CBC: cerebral-buccal connective). In addition, several ways of recording activity are schematically illustrated: (1) intracellular recording within a neuron’s cell body, (2) extracellular recording just outside a neuron’s cell body, and (3) extracellular electrodes on nerves. Modified from: Lu, H., Chestek, C. A., Shaw, K. M., & Chiel, H. J. (2008). Selective extracellular stimulation of individual neurons in ganglia. Journal of Neural Engineering, 5(3), 287–309.

Moreover, in Aplysia, neurons can be uniquely identified and given specific names, because the inputs they receive, the outputs they generate, their location in the ganglion, and their electrical properties are very similar across animals. The ability to identify neurons makes it possible to work out details of neural circuitry, as well as to understand the sensory inputs and motor outputs of the circuit. Therefore it is possible to create maps of the neurons in the buccal ganglion showing their specific names (for example, B3 or B8).

How neurons can be identified as individuals is schematically illustrated above. On the left side, an actual photograph of the buccal ganglion is shown, and circles are used to indicate the locations of specific identified neurons. On the right is a map based on this photograph, showing the actual names associated with several of the identified neurons. Modified from: Lu, H., McManus, J. M., & Chiel, H. J. (2013). Extracellularly Identifying Motor Neurons for a Muscle Motor Pool in Aplysia californica. JoVE (Journal of Visualized Experiments), 73, e50189.