The Anisfield-Wolf SAGES Fellowship is one of many ways in which gifts can promote scholarship about race and diversity. If you are interested in giving to the Anisfield-Wolf Fellowship, please contact Renee Ligon at 216-368-3646 or renee.ligon@case.edu. 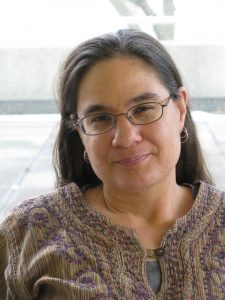 Edith Anisfield Wolf (1889-1963) was an alumna of the College for Women at Western Reserve University, a linguist, poet, and philanthropist.  She notably served as one of the first female trustees of the Cleveland Public Library and, in partnership with the Cleveland Foundation, established the Anisfield-Wolf Book Awards, devoted to recognizing exemplary scholarly and literary studies of contemporary race relations.

In 2011, the Cleveland Foundation appointed Lisa Nielson at CWRU as the first Anisfield-Wolf SAGES fellow, with the goal of fostering “students’ understanding of racism and their appreciation of the rich diversity of human cultures.”

Lisa Nielson is a CWRU scholar and professor whose research and courses span musical contributions of women in the medieval Islamic empire, ancient and modern enslavement, and comparative philosophical and scientific theory from various cultures as a reflection of human capabilities, behaviors, and identities.  Nielson’s courses are part of SAGES, the general education curriculum for all undergraduate CWRU students.

Since her appointment, Nielson has also won the Richard A. Bloom, M.D., Award for Distinguished Teaching in the SAGES Program and the Carl F. Wittke Award for Excellence in Undergraduate Teaching.

“Working with Karen really has been a partnership,” Whiting says. “We have collaborated in imagining where this program could take us, and she has been joyful at the successes SAGES has had. When Lisa won the Wittke Award last year, Karen was as happy as we were.”

Whiting adds that Long has published essays by some of Nielson’s students on the Anisfield-Wolf website. “That’s wonderful for the students,” he says. “That their writing is given a third-party endorsement makes them very proud—and they should be proud of the work they have done.”

The legacy sustained by the book awards, and now by the fellowship program, was initiated by Edith Anisfield Wolf (1889–1963), who attended the College for Women at Western Reserve University. The daughter of John Anisfield, an Austrian Jewish immigrant who prospered in the garment industry, she devoted her life to philanthropy and literature. She was one of the first female trustees of the Cleveland Public Library, and she provided support and leadership to other civic, cultural and charitable organizations. Fluent in several languages, she also published six volumes of poems she wrote in the downtown office where she managed her family’s estate.

In 1934, Edith Anisfield Wolf established an annual prize in her father’s memory to honor outstanding scholarly books on the subject of race relations in the contemporary world. Seven years later, on the jury’s recommendation, she created a second prize for literary works addressing this theme. In 1944, after the death of her husband, Eugene E. Wolf, she added his name to the title of the awards.

From the beginning, the program’s concerns were broader than the term “race relations” might suggest. To be sure, many of the winners have focused on the conditions of African American life. But Anisfield-Wolf juries have also honored books about ethnic, national and religious communities, as well as works examining the historical roots of current social ills. 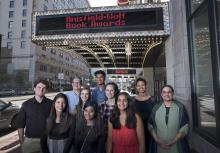 Today, 80 years after the inaugural prize was announced, the list of Anisfield-Wolf Book Award-winners includes much of the most significant scholarship ever published on race and racism, the immigrant experience in the United States, the Holocaust, colonialism in Africa and freedom movements around the world. On the literary side, the list includes scores of acclaimed novelists, poets, memoirists and playwrights, including Sholem Asch, Ralph Ellison, Nadine Gordimer, Maxine Hong Kingston, Toni Morrison, Derek Walcott and August Wilson.

Nielson and Corinealdi first learned of the awards when they read job postings for the fellowship, and they each remember their excitement as they scrolled through the roster of winners on the Anisfield-Wolf website. They already knew so many of the books. Moreover, their understanding of diversity, and of past and current struggles for civil rights and social justice, had been shaped by those books. Partly for this reason, Nielson says, “I had never wanted anything more than this job.”

Since then, she has discovered that the Anisfield-Wolf canon is equally compelling to her students, who engage in thoughtful, far-reaching discussions inspired by their reading. In a 2013 essay for the awards program’s website, Nielson wrote:

Listening to my students, I find a generation that thinks creatively about politics, gender, race, sexualities. . . . Their desire for inclusion and capacity for acceptance astonishes me; they inspire me to think more fluidly about myself. They have changed me profoundly as a teacher and as a human being.

Edith Anisfield Wolf created the book awards to recognize literature dedicated to fostering conversations about tolerance and cultural acceptance. Through these books and my students, I am constantly working to hear what I think was her real message: Listen.

This academic year, the two Anisfield-Wolf SAGES Fellows will lead a total of seven seminars. Some will be based entirely on the work of winning authors. For Corinealdi, part of the appeal of designing such courses lies in pairing historical writing with fiction and poetry, so that students can shift between a scholarly perspective and the more personal vision of imaginative literature.

In addition to her SAGES duties, Nielson will be engaged in bringing the themes of the Anisfield-Wolf program—and the books themselves—into classrooms and curricula beyond the university. This work is aligned with efforts by Long to attract new readers through a variety of school and community programs.

Nielson will continue her involvement in several campus initiatives as well. Since 2012, she has led a series of informal discussion groups that address issues surrounding race, gender, and difference. She has also contributed to New Student Orientation programs, and worked with student organizations, to stimulate dialogue about diversity and inclusion.

For her part, Corinealdi has eagerly begun sharing the work of Anisfield-Wolf Book Award winners with her students. “I made a point of including as many authors in the syllabus as possible—a lot of short stories and essays, some poetry,” she says. “And I tell the students: ‘If there are one or two authors that you find yourself enthralled by, I want you to read more of their books, and make that reading a part of your academic growth.’”

Like everyone associated with the book awards, Corinealdi is eager to let people know that “good, provocative work is out there.” In society at large, she says, “We don’t have enough spaces where we’re talking about it.” But in the university’s SAGES program, there are more spaces now.