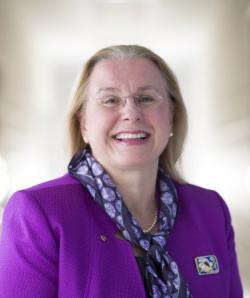 Sunniva Collins joined the faculty of the Case School of Engineering at Case Western Reserve University in March 2013, where she teaches Materials, Design, and Manufacturing courses in the Department of Mechanical and Aerospace Engineering. Prior to CWRU, Collins was employed by Swagelok Company for 18 years. She joined Swagelok as a research metallurgist and served in several engineering management positions. As senior research fellow at Swagelok Company, Collins coordinated the company’s academic and governmental research partnerships

Collins received her doctorate and master’s degree in materials science and engineering from Case Western Reserve University and her bachelor’s degree from the University of Michigan. From 2003 to 2006, she was Swagelok’s Principal Investigator on a DoE-funded project to evaluate surface hardening of austenitic stainless steels by low temperature carburization. The results of this research have been recognized with the 2006 ASM Engineered Materials Achievement Award, and a 2008 R&D 100 Award. She was also PI for Swagelok on an Ohio Department of Development commercialization project from 2008 to 2012; and on a DARPA project led by the NRL from 2008 to 2010.

Collins is a Fellow of ASM International (FASM) and served on the ASM Board of Trustees from 2008 to 2011 and 2013 to 2016. She was President of ASM International in 2014-2015. Collins is a Fellow of Alpha Sigma Mu, the national honor society for materials scientists. She is the 2014 recipient of the Cleveland Technical Societies (CTSC) Technical Educator Award, and the 2019 Albert Sauveur Award from the ASM Philadelphia Chapter. She is an inventor on four U.S. patents.