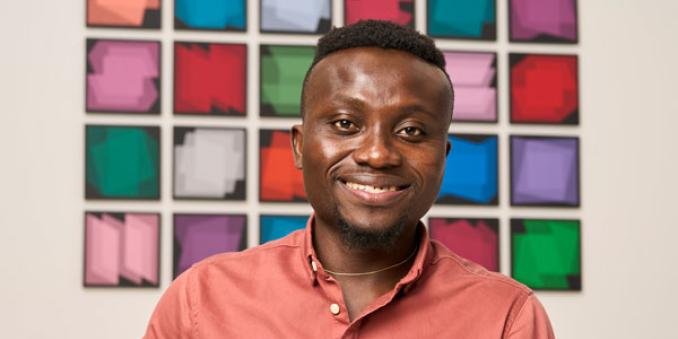 Known as "The Cleveland Optimist," he was born in Ghana and calls Cleveland his "home in the U.S." He has written for the Huffington Post and other media outlets on the topics of economic development, social justice, environmental sustainability, poverty and politics.

Based in Cleveland, Botchway consults for mission-oriented organizations both in the United States and Ghana, helping them to grow and scale their impact. He is curator of the World Economic Forum's Global Shapers Cleveland Hub and the director of community impact and innovation at Cleveland Neighborhood Progress and its consulting company, Citadel Impact Consulting.

“We are the sum of our stories—if we believe we matter, then we must believe our stories matter too, and we must not be afraid to tell them," said Botchway. "For me, I strive to embrace the story of my origins and of my journey, and I find the courage to tell it authentically.”

Listen to "The Cleveland Optimist"

An excerpt from the Fall 2021 action magazine

As an international student, Kwame Botchway (SAS ‘19) could not access student loans for graduate school in the U.S.—and he had his sights set on attending the Mandel School. Being accepted into the Leadership Fellows program enabled him to make the move from Ghana to Cleveland and begin his social work career.

The full scholarship was meaningful to Botchway—and now he’s paying it forward in the Cleveland community.

For his capstone project, Botchway worked with Cleveland Neighborhood Progress (CNP) to design a program that would elevate the work of women and minority contractors while helping Black and Brown families build wealth through homeownership.

Village Capital Corp., a subsidiary of CNP, officially adopted the project—titled Contractors on the Rise—and brought Botchway on as community capital and impact manager post-graduation. Effects of the COVID-19 pandemic slowed the initial rollout of the program, but in its first two years, Contractors on the Rise has renovated and sold 12 homes in the Greater Cleveland area, with more in progress.

With additional funding on the way, Botchway is taking the opportunity to redesign the growing program using the trauma-informed approach he learned at the Mandel School. “You need to be cognizant [of the fact that] you’re working in communities that have a history of trauma, of being redlined,” he said. He’s integrating feedback from contractors and taking a fresh look at how Contractors on the Rise works in historically disinvested neighborhoods.

Read the rest of the article