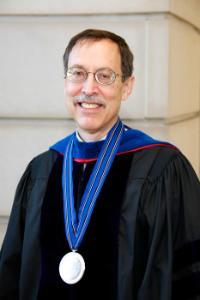 Alan J. Rocke’s work takes people across centuries and around the world. It showcases the imagination, creativity and dedication of its subjects. It opens up a world of science that most have never known.

As the Henry Eldridge Bourne Professor of History, Rocke’s work has garnered national and international acclaim, earning him a place among the foremost scholars of the history of the physical sciences. Now his scholarship—along with teaching and university service—have earned the highest honor offered by Case Western Reserve University to its professoriate: the title of Distinguished University Professor.

The award of Distinguished University Professor is a permanent, honorific title recognizing the outstanding contributions of full-time, tenured professors with exceptional academic records of research, scholarship, teaching and service. Four other faculty members received this award at fall convocation along with Rocke.

Rocke’s academic career has been devoted to CWRU, as he joined the university in 1978 after completing his graduate studies at University of Wisconsin. Originally a chemistry student, Rocke discovered the history of science and “more or less fell in love with it,” he said.

“What I especially like about this field is that it bridges the so-called ‘two cultures’: It investigates the essential character of science by examining its history, and likewise explores the enormous impact that scientific developments have had in the broad sweep of social, cultural, and intellectual history,” Rocke said.

Throughout his 34 years in the College of Arts and Sciences, Rocke has been committed to advancing the university, serving three times as the chair of the Department of History and also helping design the SAGES program.

“Professor Rocke is esteemed internationally as a historian of the physical sciences, and he is a superb teacher and a consummate university citizen,” said Cyrus Taylor, dean of the College of Arts and Sciences. “He personifies the attributes sought in a Distinguished University Professor.”

Rocke doesn’t limit his teaching solely to history of science courses. In particular, Rocke enjoys teaching the SAGES First Seminars, as the courses’ structure allows him to build meaningful relationships with the students. He also teaches a course called “Food in History.”

“Food so permeates our entire lives—socially, culturally, nutritionally, and so on—that examining its history brings together some of the most disparate and interesting parts of human existence,” he explained.

His interdisciplinary approach to teaching also is mirrored in how he conducts his research. Rocke spends a good portion of nearly every summer toiling in the archives of European libraries and museums, melding the humanities and scientific research. He is perhaps best known for his contributions to understanding the development of chemistry and its applications in 19th century Europe, though his general expertise is in the history of the physical sciences during the 19th and 20th centuries. Throughout his career, Rocke has written four monographs, two translation and correspondence editions and nearly 50 scholarly articles that have appeared in some of the most significant journals in his field.

His most recent book, Image and Reality: Kekule, Kopp and the Scientific Imagination, told stories about the imagination and creativity that is so prevalent in science.

“I wanted to demonstrate the importance the imagination in intellectual endeavors, not just in the humanities and arts, but across the ‘hard’ sciences as well,” Rocke said.

Outside of his research and teaching responsibilities, Rocke’s interests vary widely but especially include music and dance. In fact, he met his wife through their mutual passions for international folk dance. He also enjoys travel and international cuisine.

“Since I teach the history of food, I consider eating and cooking an especially pleasant sort of course preparation,” he joked.